This is the first game in the Darius series. For other games in the series see the Darius category. 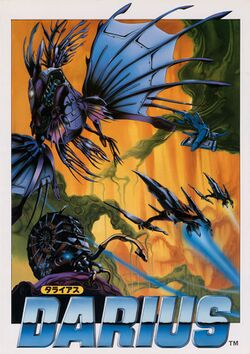 Darius (pronounced "Da-rye-us") is a horizontal scrolling shooter arcade game that was released by Taito Corporation in 1986 and licensed to Romstar for US manufacture and distribution; it runs on its own dedicated hardware (two Motorola 68000 microprocessors running at 8 MHz, and two Zilog Z80 sub-microprocessors running at 4 MHz, with two Yamaha YM-2203s running at 4 MHz for music and effects and one OKI MSM-5205 running at 384 KHz for speech). The players must use an eight-way joystick to take control of two spaceships known as the "Silver Hawks" (red for Player 1 and blue for Player 2), with two buttons to make them fire missiles at (and drop bombs on) the game's enemies - and they also have an "Arm" energy shield that can absorb the enemies' attacks. Enemies of certain colours will leave powerups behind when killed (red for Missile, green for Bomb and blue for Arm); if either player should collect more than seven of a particular type of powerup the weapon their colour corresponds to is updated to a more powerful version (it also becomes that player's default weapon and can then be powered up further). Furthermore, there are two other types of powerups, that can be revealed by shooting specific parts of the terrain (white, which awards extra points, and orange, which will kill all enemies currently on screen) - and after the players have defeated the boss at the end of a zone the tunnel will split into two, so the players must decide whether to take the upper or lower path, both of which shall lead to a different zone. There are a total of twenty-six zones in the game (one for every letter of the alphabet); however, the players only have to go through seven of them to finish the game (and one of them will always be Zone A, as it is the game's starting zone).

This is the first game in the Darius series; it was followed by seven sequels: Darius II (Arcade, 1989), which got released in the US as "Sagaia", Darius Twin (Super Famicom, 1991), Darius Force (Super Famicom, 1993), Darius Gaiden (Arcade, 1994), G-Darius (Arcade, 1997), Dariusburst (PSN, 2009), and Dariusburst: Another Chronicle (PSN, 2010). Syvalion (1988) is also a spin-off of the series, due to the fact that in the middle of that game's storyline, the main character (the eponymous "Syvalion") brings aid to the inhabitants of Planet Darius, and in 2019, a duo of compilation titles, Darius Cozmic Collection Arcade and Console, was also released on the Nintendo Switch and Sony PlayStation 4.

In 1994, the same year that Darius Gaiden came out, characters from this game were featured in the eighth stage of Space Invaders DX's "Parody Mode"; the following year, both Silver Hawks were also featured as two of the selectable player ships in Akkanvader (the message preceding the boss of the second world, "WARNING! A HUGE BATTLESHIP, YAMATO #106780, IS APPROACHING FAST." also references this game, and the enormous mechanical sturgeon and octopus on the battleship in question, whom both players must kill, are "super deformed" versions of two of the game's bosses).