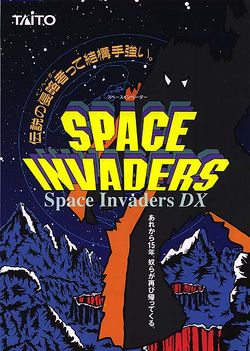 Space Invaders DX is a fixed shooter arcade game, that was released by Taito Corporation in 1994; it runs upon that company's B-System hardware, and is the sixth (and fifth official) title in their Space Invaders series. It is a carbon copy of the original title that started the craze sixteen years previously.

Players must select one of three different modes; Normal Mode (which replicates the original in four different cabinets: monochromatic upright, with a backdrop, monochromatic cocktail, monochromatic cocktail with strips of cellophane and colour cocktail), Versus Mode (which puts two players head to head - and ironically, the cannons can get killed any number of times in this mode, like the one from Namco's King and Balloon), and Parody Mode (which replaces the characters with those from nine of Taito's older games: The NewZealand Story (1988), The FairyLand Story (1985), Bubble Bobble (1986), Rainbow Islands (1987), Mizubaku Daibouken (1990), Arkanoid (1986), KiKi KaiKai (1986), Darius (1986), and Don Doko Don (1989)). The main character for that seventh game, Sayo-Chan, would also later go on to reappear as one of the first-player characters in Akkanvader in 1995, and after the Space Invaders series had ended, one of the first-player characters in Pop'n Pop in 1997.