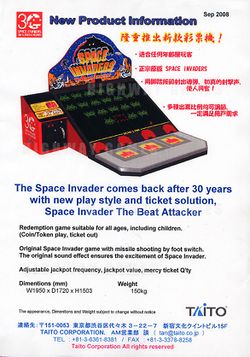 Space Invaders: The Beat Attacker is a fixed shooter arcade game that had been released by Taito Corporation in 2008, to mark the thirtieth anniversary of the Space Invaders series; it is the ninth, and eighth official, title in the series, in addition to the second since Akkanvader in 1995, and the only one to allow up to three players to play simultaneously. It is also a video ticket-redemption game, in which between one and three players must step on three foot-activated switches to fire shots at a formation of twenty-four original-style Medium Invaders - and as in the 1990 test game, Minivader, the invaders shall not fire any bullets (but for this occasion, it is because there is nothing for them to fire at), which means the only way the players shall lose is if the invaders reach the bottom of the screen, indicated by the text "DEAD LINE" on the monitor. In a one-player game, the player must operate all three foot switches themselves; however, in a two-player game, one foot switch has to get operated by the first player while the others must be operated by the second (or vice versa), and for a three-player game, all three players must operate one foot switch each (both, or all, players also play on the same coin).