Return of the Invaders

From StrategyWiki, the video game walkthrough and strategy guide wiki
Jump to navigation Jump to search
Return of the Invaders | Table of Contents | Gameplay | Walkthrough 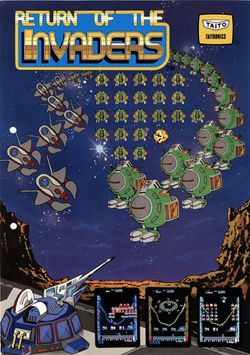 Return of the Invaders is a fixed shooter arcade game, developed by UPL for Taito Corporation, (in 1985); it utilizes three Zilog Z80 microprocessors (running up at 3.072 MHz) with a Motorola M68705 (running at 4 MHz) and two Texas Instruments SN-76496s for audio. It's the fourth (and third official) title for their Space Invaders series - for Space Invaders II was created without Taito's authorization.

The player must use a 2-way joystick to direct a cannon (this time, referred to as "Xerovy") across the bottom of the screen while using a single button to fire shots up at formations of descending invaders (this time, the regular invaders are referred to as "Flector", and the new "deflector" and "master" ones are referred to as "Legard" and "Zicon" respectively); the shields (or "barricades") are also referred to as "Xero-Guards", and the lights in them will change colour from blue to yellow to red, as they are hit, before blowing out and exploding. From the third stage onwards they will also occasionally move and try to block your shots - also, the UFOs that occasionally fly over the formations will also occasionally be carrying a powerup (the blue "Gazel", the yellow "Goral", and the red "Gowl"), which (if you do not shoot the UFO dead-centre) will fall down onto the Xerovy, and bestow its powers upon it, altering its appearance in the process. Also, if there are three or more "Zicon" left for the end of any stage, it will invoke a new "Challenging Stage" (as they fly up to the top of the screen, transform into one of three different "Mother Ships" and fly around above you while sending out eight types of "bonus" invaders).