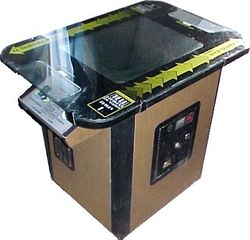 This guide is for the 1980 Midway Games game. For the 1979 Taito Corporation game of a similar name, see Space Invaders Part II.

The players (two can play simultaneously) must once again use a two-way joystick to direct a cannon (red for 1P and yellow for 2P) across the bottom (or top, in the case of 2P) of the screen with a single button to make it fire shots at a 5x11 formation of descending invaders; because it is possible for one player to kill the other and gain his ship, it plays like a cross between its two predecessors and Irem's Space Beam. As with the original "SIP2", the shields have the stage number on them - and when the saucers fly over that formation, they will occasionally drop reinforcement invaders (to make the stage last longer). In a two-player game (if only one player is present, the second player's ship is controlled by the CPU), two types of saucers will appear, and both types are worth between 50 and 525 points; if one player runs out of lives and still has invaders on his half of the screen, they will move back and forth when they reach the bottom of the screen, until the surviving player kills them. And if one player runs out of lives, and the surviving player clears the defeated one's half of the screen with more than one life remaining the defeated player will gain one of the surviving player's lives and be resurrected.