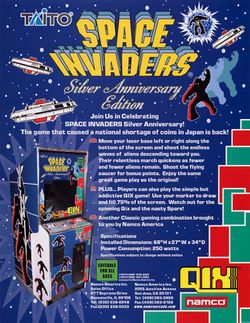 Space Invaders: 25th Anniversary is: a compilation arcade game, produced by Taito Corporation in 2003 and licensed to Namco of America for US manufacture and distribution; the original version runs on Taito's G-NET hardware, while a second version (which also includes Taito America Corporation's Qix, 1981) runs upon its own dedicated hardware (and it also has two separate sets of controls: a trio of buttons for all the Space Invaders games, and a 4-way joystick and two additional buttons for Qix).