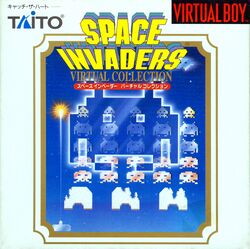 Space Invaders Virtual Collection is a compilation game that was released by Taito Corporation for the Virtual Boy in 1995, exclusively in Japan; it includes three remakes of the original Space Invaders game from 1978 and the second one from 1979 (Original 2D, Virtual 3D, and Challenge). However, while the original titles were in monochrome (with overlays on their screens), these remakes are, due to the Virtual Boy's limitations, in red - and in Challenge mode there are two options (Time Attack, in which you have to clear a single stage of invaders in the quickest possible time with only one life, and Score Attack, in which you try to get a high score for it with three lives and one extra at 1500 points).

Attention all Earthlings! Relentless alien hordes have been
identified near you. Prevent the dangerous Space Invaders
from landing on your territory. Use your cannon to defend
against waves of descending alien invaders. Don't let them
hit the ground or it's all over for you and the Earth! Destroy
them and score points!
© Taito Corporation 1995