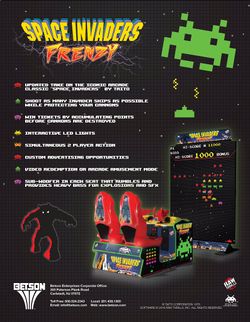 Space Invaders Frenzy is a fixed shooter arcade game which was developed by Raw Thrills, Inc. for Taito Corporation, and released in 2016; it is the 13th (and 12th official) game in their Space Invaders series, in addition to the sixth since Akkanvader in 1995. It's also, as with 2008's Space Invaders: The Beat Attacker, a video ticket-redemption game - but this time, the players must use a pair of lightguns that are mounted on the front of the game's (non-enclosed) sitdown cabinet to move the gunsights of two pairs of cannons (red for 1P & blue for 2P) around the screen and fire them at various formations of original invaders (which, since the last game, have regained the ability to fire bullets down at them, and because the cannons may not move in this game, it makes it somewhat like a cross between the first two Space Invaders titles and Taito America Corporation's 1981 defence shooter title, Colony 7).

The game also has an "Amusement Mode" for non-ticket-redeeming locations, which features various waves, powerups, bonus stages, and a continue feature; in this mode, the players play only for points and to complete the game by clearing all fifty stages. Even though no tickets will be dispensed by the cabinet during this mode, it unlocks an "Extra Lives" option in the service mode when it is turned on - and from here, arcade operators can adjust the number of starting lives, as well as the bonus values.