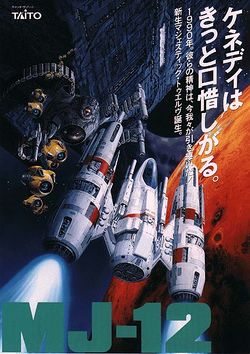 Majestic Twelve: The Space Invaders Part IV, also known as MJ-12 and released as Super Space Invaders '91 over the United States, is a fixed shooter arcade game released by Taito Corporation in 1990; it runs on that company's F2 hardware, and as the name suggests, is the fourth (official) title in their Space Invaders series (Space Invaders II was created by Midway without Taito's authorization).

As with the four previous games, the players (two can now, officially, play simultaneously) must direct cannons (this time, referred to as "CG30"s) across the bottom of the screen while using one button to fire shots up at formations of descending invaders; the UFOs that occasionally fly over the formations will also leave powerups behind, some of which (when collected) can be activated by use of a second button. It is also worth noting that the CG30s shall not die immediately when hit - they will merely lose a "shield" (they can start out with between none and three, and can earn up to eight, by collecting "S" powerups), but if any invader manages to make it down to the bottom of the screen, they will both die immediately (as opposed to getting an immediate game-over). There are also new "Cattle Mutilation" bonus stages, as well as (for the first time in the series) "boss" invaders which take a lot of hits to kill.