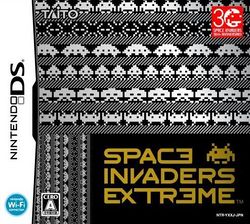 Space Invaders Extreme is a fixed shooter game which was initially developed by Taito Corporation for Square Enix, and released upon the Nintendo DS and Sony PlayStation Portable in 2008; it is the eighth and seventh official title for the Space Invaders series, and the first since Akkanvader in 1995. A year later in 2009, it was redeveloped by Backbone Entertainment and released on the Xbox 360 - and nine years after that in 2018, it got redeveloped for a second time (this time by Taito Corporation themselves) for Degica, and released on Microsoft Windows (Windows versions 7, 8.1, and 10 only).

SPACE INVADERS EXTREME combines the captivating
essence of the original game with a stunning alliance of
futuristic graphic design and cutting-edge audio. The
gameplay experience has been developed to maximise on
the consoles' abilities, offering players a whole new range
of amazing features including a vast array of new power-
ups.
© Taito Corporation and Square Enix 2008