Battle consists of a single player campaigns and multiplayer matches against randomly selected opponents. This page describes the strategies and tips for defeating all types of scenarios, thought more specifically multiplayer matchups.

For single player campaigns, please see the sub-pages for the respective campaign:

First, you pay 200g to get matched with a random opponent. You get 30 seconds (usually 28 after the animation fades away) to come up with a strategy or decide to match with another opponent for an additional 200g. This cycle continues until you either wait the 30 seconds or you take action (such as by placing a unit or using a tactic).

When battle begins you get 2 minutes and 30 seconds to fight. When time runs out, or either team is completely destroyed, the battle is over.

At the end of the battle a summary is given and a victor is decided. The following information is presented: 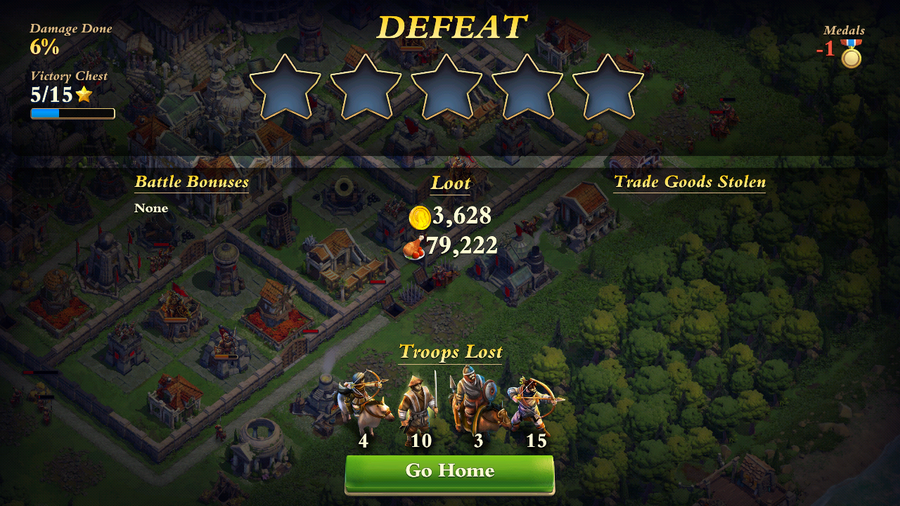 The victor is decided based on whether or not the attacker acquired a badge. There are five badges that an attacker can acquire:

When you attack certain enemy buildings your units' attacks will automatically steal gold or food for you. Certain buildings hold certain loot. When you are not in battle, you can check which buildings store loot by clicking on their info button. Below is a list of buildings that store gold. Note that although Caravans store gold, they cannot be attacked during battle as they retreat into the Town Center.

Tips for getting loot

By achieving these optional objectives you will receive a small reward:

The winner of the battle gains glory (in the currency of medals). The amount of glory gained is determined by comparing the two players' levels and overall strength (a calculation that is hidden to players). The more glory you have, the higher the multiplayer

When you place a unit, it will behave on its own. For the most part, you cannot control it, so timing and location is important! After units have been placed, if you use the target ability, it will rally all of your troops to that point. However, that ability has a 30 second cooldown and can cause problems if used incorrectly so be careful!