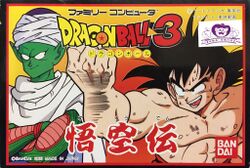 The game's card-based combat system and "board game"-inspired map system is expanded on, along with a new animation system for combat. In map mode, you advance spaces by the number of stars written on the card that you select. Movement may be reduced by events. If you stop on a specific square, you may get items or encounter enemies. Combat is also done with cards. Your attack power is determined by the number of stars (1 to 7), and defense power is determined by Chinese numerals (1 to 7). The fighter with the higher number of stars succeeds with their attack, nothing that a 1 will beat a 7. A text menu based adventure mode takes place between map segments. Proceed with the story by examining the people and things around you. You can move around in enemy bases, but if you go too far and hit a wall, you will take damage.