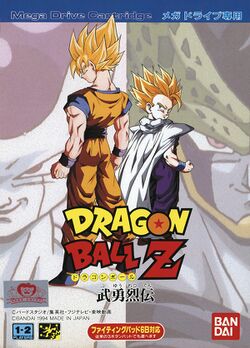 Dragon Ball Z: Buyuu Retsuden (ドラゴンボールZ , Doragon Bōru Zetto Buyū Retsuden?, Dragon Ball Z: Intense Martial Transmission), known as Dragon Ball Z: L'appel Du Destin (Dragon Ball Z: The Call of Destiny) in France, is a Dragon Ball fighting game exclusive to the Sega Mega Drive, based off of the Super Nintendo exclusive Dragon Ball Z: Super Butoden. It was released in Japan and France and later in Portugal, though no alterations were made from the other versions except for region protection. It is strictly based on the manga's Frieza and Cell Saga storylines.

Playable characters include heroes such as Goku and Vegeta and villains such as Frieza and Cell. Each character has different moves to match their anime/manga counterparts' abilities and different final opponents to coincide with the manga's storyline. Buyuu Retsuden is the only video game in the Dragon Ball Z series, and for that matter, the Dragon Ball series in general, to be released for the Sega Mega Drive/Sega Genesis in any region.