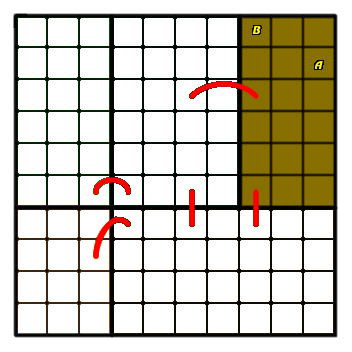 Castor is a rocky wasteland found in the northeast corner of the world. It is marked by dead trees and the ground is scarred with crevices that lead to a subterranean level below. Though Castor is a bit bigger than Zarik, it contains just as few points of interest. Most of the region is useless space, and exploration will only result in battles against the local inhabitants. The inhabitants range from plants which release poisonous spores that confuse you unless you possess the Reverse Grass, to boomerang throwing Lizard Knights, and on to unholy skeletons that roam the land and are impossible to defeat. Striking down a skeleton will only put it to rest temporarily, so don't stick around.

Although light on features, the ones that Castor do possess are quite important. Three particular items can all be found within one small section of the land, and a fortress occupies the northwest corner of the region. It is here that you will have to explore in order to locate another of the stolen magic books.

A: Castor's wealth of items[edit] 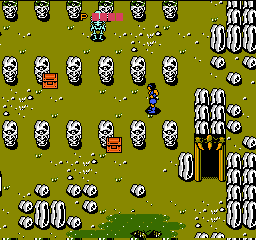 Locate these two chests before heading into the cave

It won't be evident upon visiting Castor, but it just so happens that all of the items worth exploring Castor for can be found all together in one region. Towards the north east corner of Castor, you will come upon a section (A) that contains 24 statues arrange in a 3 × 8 configuration. If you shoot many of these statues, chests will appear which you can collect to hear advice. However, two particular statues contain items. One is found in the middle row, fourth from the left. Use the Yunke Fruit on this statue to obtain the invincibility granting Necklace. The second one is located on the bottom row, third from the right. Shoot at this statue four times to reveal the chest, and open it to obtain the Elm Branch, an important item for later. 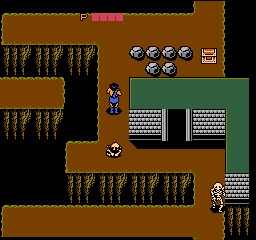 Grab the fire staff from the chest inside the cave

Right nearby, you will see a cave entrance. Head inside the cave entrance to be taken down to the underground region. While you can also access this region by falling through the crevices above, they often drop you into the disconnected section on the right. The tunnel entrance will ensure that you can access the left area. As soon as you arrive, you will probably notice the chest directly above the entrance. Head around to it and open it, and you will obtain the first weapon upgrade, the Fire Staff. You must be at level 5 or higher to utilize this staff. If you are, you can fire bolts of flame at your enemy. If your attack doesn't hit, it will briefly light the ground on fire and harm any enemy that approaches it. Armed with a better staff, you are ready to tackle the fortress in the northwest corner of Castor (B). 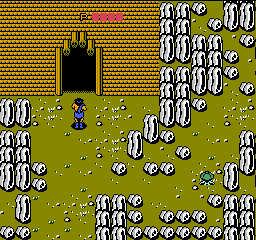 The entrance to Castor Fortress is in the northwest corner 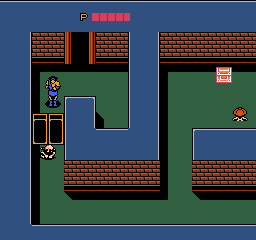 Find the Dark Bell in the basement of the fortress

The basement is actually quite long, roughly four screen-widths wide, and crawling with undestroyable skeletons. As soon as you arrive, a black door will appear and prevent you from passing. Fortunately, these doors are easily removed by using Yunke Fruit on them. While there are two treasure chests, one early on and one deeper in, the first one is the only one worth investigating. Inside, you will find the Dark Bell, which has the power to lower a cloud of darkness on your surroundings. To check out the second chest, you'll have to brave two burning floors and put down a lot of skeletons that get in your way, only to find a chest that restores lost magic points. If you have the Necklace, you should certain take advantage of it's power on the way down to the chest, since you will get those magic points right back.

When you return to the first floor, head up to the open door. For the next two floors, you must simply cross along a corridor, first from left to right and then from right to left, unlocking a locked door at each end. The chest upon entering the second floor can restore life. When you pass through the door on the third floor you will be up on a rooftop facing the next boss of the game, Buiruheru. 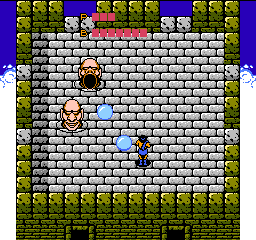 Shoot the mouths while they are open

Granted power by the Book of Earth, Buiruheru has become one with the stone of the rooftop. He chooses locations on the roof to raise his head and shoot a large bubble from his open mouth. These bubbles bounce along the edges of the roof until they expire or until you pop them by shooting them. When a head rises up, it will either face down, to the left, or to the right, but never up. In order to attack him, you must fire your weapon into his open mouth. In fact, it is even easier to defeat Buiruheru with the Fire Staff if your timing is just right. If you wait to fire approximately once every second, you can time it so that the next bolt strikes him just as the effects of the previous bolt wear off. If you maintain this timing, you can fire at the head indefinitely until the head explodes (barring any interference from the bubbles). If a head gets away from you, you'll just have to wait for another one to resurface.

Just like Wamuheru, Buiruheru can clone himself, up to three times in fact, although no more than two will ever appear at one time. In order to win your fight against Buiruheru, you must successfully destroy three heads. Once you do, the Book of Earth will surface. Collect the book and make your way back down the fortress to the wastelands outside, and prepare to journey to Requi, the region of lakes.