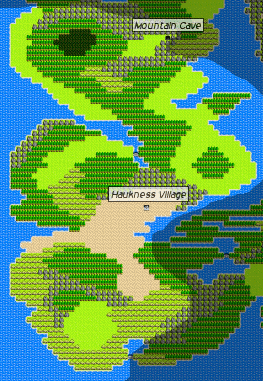 The northern part of this region contains easy monsters along with a cave where you can find the Fighter's Ring. Traveling south the monsters become harder very quickly; you'll find a ruined town in which is hidden Erdrick's Armor but you will most likely have to wait to venture there until after you visit Cantlin in the next chapter.

The sets of enemies you'll encounter in this region isn't strictly divided up by bridges, but the monsters become harder very quickly once you go south.

By the time you start crossing that western bridge into the Southwest region of Alefgard on a regular basis, you will probably start to notice that you have become so powerful that monsters are now starting to flee from you! There's little that you can do about it except to appreciate how strong you've become.

Enemies that you will encounter near Tantegel Castle:

Enemies that you will encounter in the middle of the region:

Enemies that you will encounter in the southern part of the region:

A cave is situated in the mountain chain along the eastern edge of this region. If you have the spell of Radiant, you can explore the cave and see what it holds. This cave is entirely optional and holds nothing of great value, though there is one useful item contained within. The cave is home to a different set of monsters, and when you venture from the first floor down to the second, the monsters get even stronger.

You won't find much treasure on Floor 1, just a lot of stairwells down to floor 2. If you travel to the passage along the northeast corner you'll find a lone treasure chest containing an Herb. All of the monsters on this floor match the difficulty of the monsters outside the cave, and should pose no problem. Only one of the stairwells on this floor, the one near the center, can lead you to all of the treasure contained in the floor below; the other two sets of stairs in the corner simply lead to dead-ends.

This is where the real treasure is, but you're going to have to fight for it. The monsters down here are considerably tougher than the ones above. Knowing Stopspell is important for your survival in fights against Warlocks and Drakeemas, a special underground variety of the Drakee species; don't come down here without it. Knowing the spell of Outside is an added bonus, and will guarantee that your strength level is high enough.

If you took the center stairwell to this floor, then you can collect everything that the floor has to offer. Of particular interest is the Fighter's Ring, which is contained in the left-most chest of the pair found in the north-west. Donning the Fighter's Ring by selecting it in your item list makes you more powerful. It does not enhance your attack power, but it does improve the rate at which you perform excellent strikes. (Note: There is a bug in the original NES version that prevents the Fighter's Ring from working as designed.)

Another interesting treasure chest can be reached by traversing the pathway along the southwest corner and back up. This chest may contain a lot of gold, or the Death Necklace. Whatever you do, do not examine the Death Necklace, or a curse will be placed upon you and you must then visit the curse-breaking man in Brecconary Town to remove the item. If you don't equip it, the necklace fetches a nice price of 1200 gold when you sell it at the item shops.

The further south you travel, the stronger the monsters get. While you might not have any trouble with monsters in the northern part of the region, the monsters below may rip you to shreds in no time. It becomes very important at this point in the game to pace yourself and dedicate some time to leveling up. While this slows down the progress of your game, it makes staying alive much easier, and it prepares you for parts of your quest that you must still complete.

If you've had no problem with the region around Rimuldar, than you'll be fine in the section below the Mountain Cave, before you cross the bridge to the west. You can fight the Wolflords, Wraiths, and Metal Scorpions with ease, and if you're lucky, you may stumble upon a Goldman. There is some very expensive equipment that you have yet to buy, so all the money you can find is welcome.

Crossing the bridge to the west is another story. If you are not prepared, monsters like Wyverns, Knights, and Wraith Knights can kill you in only a few turns. Even though it may take some time, it is wise to wait until around level 15 before you spend a lot of time on the other side of the bridge. Knights are quite susceptible to Sleep, but they know the magic of Stopspell and will try to prevent you from casting anything. Wraith Knights are powerful undead fighters that know the spell of Heal.

By traveling even further south, you will be venturing into the territory of Demon Knights and Magiwyverns. Magiwyverns aren't too bad if you manage to cast Stopspell successfully, but Demon Knights are in a class by themselves. Even at level 16, you should probably run away from them until you advance another level and learn Healmore.

Wandering around this far south may be dangerous, but it might be worthwhile if you chance upon a Metal Slime. Metal Slimes are to experience points what Goldmen are to gold pieces, but they don't like to stick around. They run quite frequently, making it difficult to score the three or four hits needed to take them down. There's not much you can do about it either as they're quite resistant to Sleep magic. Just be persistent and you might find a stubborn Metal Slime that actually insists on fighting you. 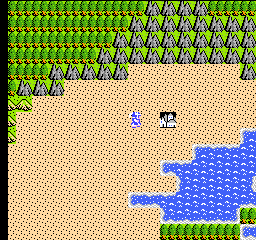 A town in the desert

Additionally, there is a location with a specific encounter:

Once you cross over the bridge south of the Mountain Cave, you will notice a region of desert to the south. If you travel around the mountain range to explore it, you will see what looks like a town situated in the desert.

One look at the town close up, and you'll realize that it is completely deserted. Worse, the town is literally crawling with strong monsters. If you're not ready to fight these monsters, then leave the town immediately. Obviously nothing in the game is without importance, but it will take a trip to the town of Cantlin further south to learn more about this mysterious devastated town. Whatever secrets it holds will have to wait until you are level 15-17, and preferably have some better equipment from Cantlin. 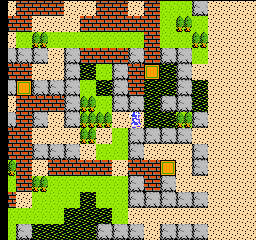 Find the tree behind the old armor shop

Once you visit Cantlin and speak with everyone available, you will hear a lot about the former Armor shop that used to exist here, and the tree under which something important is buried. Wandering around the remains of Hawksness, you'll find what looks like a former shop overgrown with poisonous swamp tiles. To the right of those tiles are a tile of trees. Once you step on those trees, you won't even have a chance to search before you are attacked by a one-of-a-kind Axe Knight. This Axe Knight is out to kill, and does not want you finding the item hidden here. Since this is a BOSS fight, you cannot run from this knight, and unless you know HEALMORE and have the Flame Sword and Silver Shield he will be very difficult to kill without luck. Defeat the Knight and search the area to be rewarded with a precious item: Erdrick's Armor. DO NOT LEAVE THE TILE UNLESS YOU WANT TO RE-FIGHT IT AGAIN! This armor is the best form of armor to be found in the game; healing you with every step that you take, protecting you from the effects of the poisonous swamp and barrier tiles, and increasing defense against breathing fire. It's an extremely valuable item that will quickly speed your progress, and well worth a few failed attempts to recover - just beware of dying and losing your gold that will be needed in Cantlin.