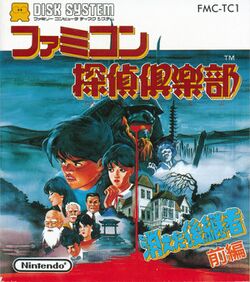 Production was directed by Gunpei Yokoi, and the original text was written by Yoshio Sakamoto. The game was one of many mystery-solving adventure games released around the time. Contemporaries include the Misa Yamamura Suspense series and the Jake Hunter series. The primary difference between these games and Tantei Club was the use of a teenage boy as the main character and detective. It became a series in 1989 with the release of the sequel, Famicom Tantei Club Part II: Ushiro ni Tatsu Shoujo.

The game is a standard command-style adventure. The player chooses from a set of text commands to interrogate, examine, or move from place to place. The setting of the secluded mansion gave the game a tense and horror movie-like atmosphere which was well received by fans. The game was ported to the Game Boy Advance in the Famicom Mini series as a single cartridge in 2004, and became available on the Wii Virtual Console in 2007 for 600 Wii points. While the original FDS version requires the player to switch the Disk Cards midway through the game, the GBA and Virtual Console versions can be played without such interruptions. The game was never released outside of Japan.

The story begins with a man named "Amachi" discovering the fallen protagonist on the ground near a cliff. The protagonist discovers that he has lost his memory, and after recuperating, he revisits the cliff and meets a young girl named Ayumi Tachibana. He learns from Ayumi that he is an assistant detective investigating the death of Kiku Ayashiro, and heads over to the nearby Ayashiro estate located in Myoujin village. The Ayashiro family owns a huge plot of land passed down from generation to generation, but there is a strange saying in the village that the dead will return to life to kill anyone who attempts to steal the treasure of the Ayashiro family. As the protagonist investigates the mysterious death of Kiku Ayashiro, he discovers the terrifying connection between this saying and the serial killings which take place.

The Protagonist
The main character of the game is an assistant at the Utsugi detective agency. He begins the game in a state of amnesia, but he learns several important secrets about himself as he continues to investigate the murder case. The player is allowed to choose his name at the beginning of the game, and this name plays an interesting role in the later parts of the game. He is 17 years old.
Ayumi Tachibana
The heroine of the game, who works as an assistant at the Utsugi detective agency along with the protagonist. She helps out with the investigation on various occasions. Her graphic scheme is changed in the second Disk Card, but her character is meant to be the same as the first Disk Card. She is also 17 years old. She would later appear in trophy form in Super Smash Bros. Melee.
Shunsuke Utsugi
The director of the detective agency. 38 years old. He has taken an extended leave of absence, and does not appear at all in this game.
Zenzo Tanabe
The butler of the Ayashiro family. 78 years old. He grows suspicious of the odd circumstances surrounding Kiku Ayashiro's death, and requests an investigation from the detective agency.
Amachi
The man who discovered the fallen protagonist. He lives alone, and owns a large collection of novels. He helps out the protagonist as he is recuperating from his amnesia.
Kiku Ayashiro
The head of the Ayashiro family who died of heart failure at age 78. She was also the principal owner of the Ayashiro Corporation. A heavy smoker throughout her life.
Kanji Ayashiro
The director of the Ayashiro Corporation, and the eldest son of the family. He is also a heavy smoker. 58 years old.
Azusa Kasuga
The younger sister of Kanji and older sister of Jiro. She married into the Kasuga family, but returned after the death of Kiku Ayashiro. 40 years old.
Jiro Ayashiro
An executive of the Ayashiro Corporation and younger brother of Kanji and Azusa. He denies rumors that he bears ill feeling towards his older brother. 39 years old.
Akira Ayashiro
Kanji's son. He spends all of his time playing around and spending his father's money. Thought to have played a key role in the death of Kiku Ayashiro. 23 years old.
Kaori Ayashiro
Kanji's wife and a world famous fashion designer. She worries about her son Akira's behavior. 40 years old.
Yuri Ayashiro
The sole daughter of Kiku Ayashiro. She was a beautiful and compassionate woman, but fled from the estate, and her whereabouts are currently unknown. Her character seems to be the best fit for the game's subtitle (The Missing Heir).
Kazuto Ayashiro
The half-brother of Yuri Ayashiro. His current whereabouts are unknown.
Kanda
The attorney of the Ayashiro Corporation. He handled Kiku Ayashiro's will after her death.
Akane Yamazaki
A maid working at the Ayashiro estate. She was the first to discover the body of Kiku Ayashiro. 19 years old.
Kumada
The only doctor living in Myoujin village, and a frequent visitor of the Ayashiro estate. He cooperates with the protagonist several times throughout the game.
Genshin
The head monk of the Kanraku temple located in Myoujin village. He was old friends with Kiku Ayashiro, and knows the secret behind the mysterious saying in the village. 87 years old.
Yukiko Fujimiya
A beautiful lady who visits the ocean cliffs from time to time. She seems to be waiting for someone important.
Heikichi
An elderly man living near the ocean cliffs. He is knowledgeable about the surrounding area.
Katsuko Onishi
A childhood friend of Yuri Ayashiro living in Myoujin village. She visited the Ayashiro estate quite often during her childhood.
Elder of Yatsukachou
An elderly woman living in Yatsukachou. Her old age has significantly decayed her memory, but she holds key information on an important character in the game. 80 years old.
Reiko Ishino
The secretary of attorney Kanda. She usually exhibits a calm and intelligent persona, but is actually very short-tempered.
Motoko Yamamoto
A lady living in Yatsukachou. She has an important relationship with a certain character in the game.
Sawako Yamamoto
Motoko's mother. She used to run an orphanage, which was closed down due to a certain occurrence. She is still bedridden from the shock of this occurrence.