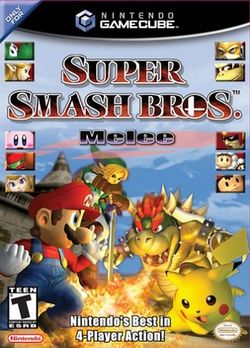 Super Smash Bros. Melee is the sequel to the popular 1999 Nintendo 64 fighting game Super Smash Bros.. Like the original, it features a cast of Nintendo characters (25) and a collection of Nintendo-themed arenas (29) for battle with up to four players. Its broad appeal and involved multiplayer mode, improved quality and added features make it a popular title to this day. International tournaments for this game have been held worldwide with competitors from several nations including the U.S. and Japan.

Compared to the original Super Smash Bros., Melee moves much more quickly. With the addition of the Wave Dash exploit, the game became much more technical and comparable to a traditional 2D fighting game. However when Super Smash Bros. Brawl was released the Wave Dash glitch was not re-added (probably to keep the game more simple). With the many changes that appeared in the new version, many of the Melee gurus continue to promote it rather than Brawl (often citing balance issues and move set changes as poor revisions) even though many of these features can be turned off (such as Final Smashes).