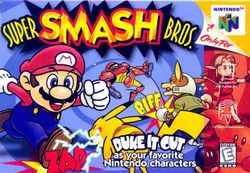 Super Smash Bros. (also shortened to Smash 64) an innovative fighting game by Masahiro Sakurai of Nintendo, is one of the top 40 best selling console games of all time (2.5 million copies by 2004). As a fighting game, it revolutionized its genre by introducing the "platform fighter" concept, where twelve playable characters (up to four at a time) battle on one of nine playable stages (however, 8 characters and 8 stages are available from the start). If characters are thrown off, they die. Instead of having health bars, characters' damage percentages are increased as they are hit, and the more damage they have, the further they fly from a given attack. There are many different gameplay modes for both single and multiplayer, and while single player is very deep because of the amount of different challenges, multiplayer is what the game excels at.

Most recently, it has been released on Virtual Console for Wii in Japan on January 20, 2009, in Europe and Australia on June 12, 2009, and in North America on December 21, 2009. While it was never released on Virtual Console for Wii U, the original Super Smash Bros. on VC for Wii could still be purchased (from the Wii Shop Channel) and played when the Wii U was running under Wii Mode.