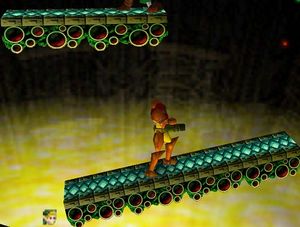 Samus' throw is pretty dismal, and the range is more of an impediment than an asset. Do not attempt to get into throw-fests with other characters unless you are sure you know what you are doing. When Samus misses her grab, she is vulnerable to anything for quite some time as her grapple comes back in. This aside, the grapple does have a range advantage, and can be used to pull one enemy from another melee for free damage, or hit a charging enemy off guard. At maximum range, the grapple also can just barely grab a hammer-wielding enemy for a throw, but this is tricky to pull off.

Like all characters who can spike, Samus can also juggle towards the ground, using ground attacks to keep an enemy pinned while she racks up damage. Her smash punch is pretty powerful, but also reasonably quickly executed and should definitely make up the brunt of your melee combos. The back jump kick, pressing and attacking in the direction opposite of which she's facing, is also reasonably powerful and can easily send enemies off the edge in an arial bout.