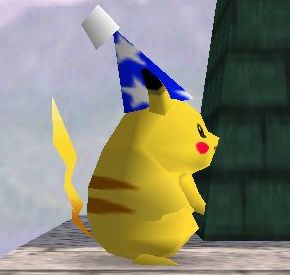 Pikachu is a Pokémon, from the game and series of the same name. Arguably the most popular of Pokémon, Pikachu is the newest (in terms of time since conception) character in Super Smash Bros. Although he has relatively short-range throws and tilts, and a very slow/weak dash attack, Pikachu is arguably one of the best characters in the game. He has high attack priority and range in the air, insanely fast recovery times (whether from being attacked or attacking), he has the best back-to-stage recovery in the game (if done right), and can combo like mad. He is also known as "Pika." If there are other Pikachus, or during a team battle, the Pikachus will wear different coloured hats instead of changing color.

These are Pikachu's physical attacks, done with