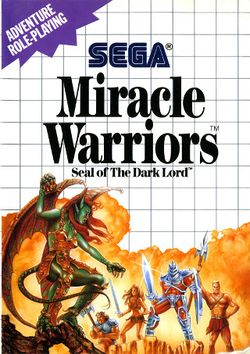 Miracle Warriors, subtitled Seal of the Dark Lord, also known as Haja no Fuuin (覇邪の封印光, Haja no Fuuin? lit. Seal of Evil) is an RPG original developed by Kogado Studio in 1986 for various Japanese home computers, including the NEC PC-8801, Fujitsu FM-7, and later the MSX series of home computers. It was ported by ASCII for the Famicom in 1987, and also to the Sega Master System which was published by Sega themselves. All versions of the game, including the only version published in the United States for the Sega Master System, included a large map of the world with the instructions. Depending on the version of the game, the map ranged from helpful to indispensable.

Along with Phantasy Star, Miracle Warriors was one of the first Japanese RPGs to be translated and sold in the United States. The Sega Master System version was remarkably improved over the previous computer versions, and looks substantially better than the Famicom conversion, which more closely resembles the original computer games. In addition to improving the quality of the graphics, the overworld map was rearranged for the Sega version, placing locations in different areas of the world and simplifying the complicated dungeons.

In the game, you start out as a lone warrior who must travel across the land in search of three companion warriors who will join you in your quest to defeat the Dark Lord. In order to get them to join you, you must seek out an item that they require before they will agree to help you. Random battle encounters only ever involve one monster at a time, but likewise, you may only use one character in your party to attack. In addition to gold, fighting monsters rewards you with fangs, and character points which serve as your reputation. Attacking encounters indiscriminately may lead to the killing of innocent folk, which will then lower your character points.

The seal of the Dark Lord Terarin has been broken and Terarin has been unleashed into the world again. She has stolen the Golden Seal and opened pandora's box, unleashing evil creatures into the world. A young hero is tasked by a king to stop Terarin. He must step into footsteps of Iason, a shepherd that once accidentally unleashed Terarin and fought to seal the Dark Lord again. The hero must enlist the aid of three companions, Guy the warrior, Medi the amazon and Treo the pirate (called Turo in the manual) and find the three keys to Terarin's lair. To face the Dark Lord, they must find the mystical weapons and armor of old and then defeat Terarin and seal the Dark Lord from the world.