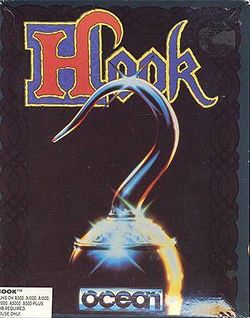 This is the first of four games named "Hook." For the others, see Category:Peter Pan.

This version of Hook is a spin-off of the 1991 Steven Spielberg movie of the same name and its plot is roughly the same. You play as Peter Banning and your aim is to find the evil Captain Hook and rescue Peter's kids.

Peter arrives home one night to find his children missing and there is a note pinned to the door. It's from Captain Hook, telling Peter that his presence is required. Tinkerbell, the fairy, then appears and puts Peter to sleep. She then carries him away to Neverland and the adventure begins.