Hyper Dyne Side Arms/Table of Contents 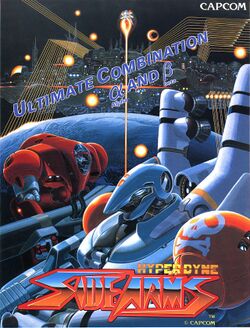 Hyper Dyne Side Arms (or simply サイドアーム (Side Arms, サイドアーム?)) is a horizontally scrolling shooter developed and released as an arcade game by Capcom in 1986. The player takes control of a flying mecha suit who must battle an alien army. Side Arms uses a two-directional attacking system similar to Capcom's previous shoot-'em-up Section Z.

Up to two players can take advantage of the Mobilsuit, a mecha that can transform into a spaceship and has considerable firepower, to take on an alien invasion force. The Mobilsuits can combine to form a much stronger mech: in two-player mode, this combines both players' Mobilsuits and confers control of the eight-way guns to one player and navigating the combined mecha around the screen to the other.

The game was originally released in arcades in 1986. It saw a TurboGrafx-16/PC Engine release in 1989; the US version was published by Radiance Software. It also saw multiple home computer versions in Europe, developed by Probe Software, including a 1987 PC release with CGA graphics and without music. The arcade version was later added to the Capcom Classics Collection Remixed for PSP and Capcom Classics Collection Vol. 2 for PlayStation 2 and Xbox.

An evil alien empire known as the Bozon are launching a full-scale attack on Earth. As either Lt. Henry or Sgt. Sanders, the player must pilot a giant space mecha known as a "Mobilsuit" to defeat the aliens. Up to two players can play simultaneously.

The Mobilesuits can be augmented in various ways, ranging from speed to added fire power. The powerup system is visually reminiscent of the one utilized in the Gradius series of scrolling shoot em' up games by Konami. POWs are collected which will allow cycling through the selection bar to choose different weapons. When the player is killed, only the last weapon used is lost. Unique to the game, Henry and Sanders, in their Mobilesuits, can combine into a more powerful hybrid form. This mode can be hard to control, as both players have the ability to move the ship.

The weapons are as follows:

Mobi-chan (モビちゃん, Mobi-chan?) is a chibi version of the Mobilesuit α (Alpha) piloted by Lieutenant Henry in Hyper Dyne Side Arms that appeared as an item and as the game's mascot. Mobi-chan appeared as a bonus item in several Capcom games, including 1943: The Battle of Midway and Black Tiger. It is also used as the game selection cursor in many home conversions of Street Fighter II. A few games also contain a chibi version of Mobilesuit β (Beta).

Hyper Dyne Side Arms/Table of Contents