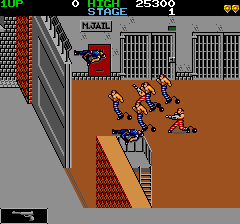 Once you've inserted a coin into the cabinet of Konami's 1986 run and gun arcade game Jail Break (original Japanese title Manhattan 24 Bunsho: N.Y. 151 Nishi Dai 100 Sutorīto), the text "PUSH START BUTTON" will flash up at the top of the screen, with the bonus life values (by default "1ST BONUS 30000 PTS AND EVERY 70000 PTS") and the text of "DO YOUR BEST! GOOD LUCK!" below it; once you have pressed the Start Button the game will proceed to the opening cutscene shown above which shows six prisoners (four Cats and two Machineguns) killing two guards and escaping from jail as the VLM-5030 tells you The warden has been taken hostage! Free him, no matter what the cost! in its male voice. The screen shall then cut to a shot of Officer Aki getting out of his car (even though it is ideal for killing the prisoners) and walking to the first stage's starting point - and once he has stopped, he shall be under your control. As you direct Officer Aki through the stage you must make him fire shots from the pistol he starts with at the prisoners to kill them (while avoiding the shots and Molotov cocktails they fire and throw at him), as well as rescue the innocents as they appear for extra points and weapons - however, if he accidentally kills an innocent or gets killed himself, he will be back to just the pistol again (in the case of the latter, he will also be sent back to the stage's most recent checkpoint, and say Let's roll. Roger. from the VLM-5030 in its male voice when he gets resurrected). Because the prisoners' commandeered trash trucks are only vulnerable to a shot from the bazooka or tear gas gun, getting and keeping them is vital throughout; also, if he fires a shot from the bazooka at an oil drum to destroy it, it will occasionally reveal the D.C. Comics superhero Batman (who had been hiding inside it, and later went on to get his own arcade game in 1990) and award a 5000-point bonus. Towards the end of the stage a warning siren shall get heard from the SN-76496 as the VLM-5030 tells you You're in danger! in its male voice - and if you manage to survive you'll proceed to the next stage.