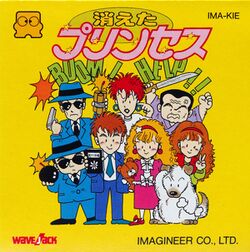 Kieta Princess (消えたプリンセス, translated loosely as Vanishing Princess) is an adventure game for the Family Computer Disk System, developed by Imagineer and published at the end of 1986. It is part of the Wave Jack series of games produced by Imagineer that come with more accessories than the average video game, including a story book and audio cassette tape.

The Kingdom of Rabia's princess goes missing during a visit to Japan, surrounding the investigation of the medicine to an "epidemic dementia," known as "Oninofuguri", and the prevention of its importing. The player takes the role of a detective determined to unravel the mystery of the missing princess Kilala, in this RPG style adventure game. Yasuko Tomita served as the model of one of the characters. Certain telephone numbers would appear, which, if called, would provide the player with a hint, spoken by Yasuko Tomita.

In order to track down Kobayashi, the criminal protagonist, you must visit five different towns and collect information. Neary every house and building can be entered, which was unique for its time. The game also features a high degree of freedom, allowing you to visit restaurants for a bite, or a Dojo to train, or to hunt for vegetation to sell for money, while you are looking for the princess.

Another introduced concept that was novel for its time was the notion of day and night changing the appearance of the city. During the evening, you may encounter a street gang, and they may open fire on you, although you can defend yourself with a revolver. However, if over 20 innocent people are gunned down, you will be arrested and sent to the police station where you must pay a fine and return to the starting point.

The degree of difficult throughout the game is considered quite high, with very few hints to help you out, while other hints are misleading. For example, one hint suggests that you if you sleep over night at a particular crossroad in a city, you will get a key item, but this hint is false. Although you are supposedly a detective, you never actually get to accuse anyone of a crime.

In addition to the disk, the game also comes boxed with a notebook, maps, and a cassette tape. This follows in the tradition of other Wave Jack titles such as Ginga Denshou - Galaxy Odyssey and Seiken Psycho Calibur. Many games in this series were not rewritable like other disks. However, if the game happened to be erase, Nintendo Headquarters would replace the disk at that time.

Theoretically, you do not need to the tape in order to make progress in the game, but the tape does contain useful information, as well as including music sung by Yasuko Tomita including the theme song, as well as many other songs which reveal important character information and tips.