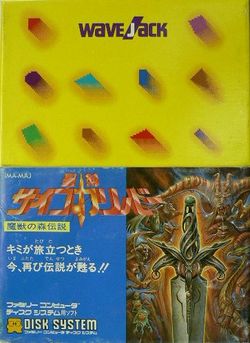 Seiken Psycho Calibur is, in many ways, an attempt to copy the success of The Legend of Zelda. However, it fails to inspire the same level of wonder and fascination. It also lacks a good degree of polish that made the afore mentioned title so great. Nevertheless, Seiken Psycho Calibur is a relatively fun game to play, as long as you have a fair degree of insight into how the game is played. There are some unintuitive aspects of the game that can make progress in the game quite difficult.

For example, you begin the game in a town which offers a variety of goods for sale, but you only receive so much money, and you can never return to the town once you leave. Therefore, what you decide to invest your money in has a substantial impact on the difficulty of the game early on. Many items can be bought for less money later on, but only if you know the location of the hidden shops that contain them. Other less obvious points in the game require a bit of back tracking from later areas to earlier areas in order to acquire items that allow you to proceed, and boss battles that are at times incredibly difficult.

This game was fan-translated into English by a user name Toma, who released the patch on December 20, 2000. The patch can be found and downloaded from here. Please be aware that there is a high prevalence of a corrupt version of this ROM on the internet. Corrupt versions of the ROM do not play correctly, and the player is never awarded money for defeating enemies. The correct CRC for this game should be C41BE40D.

Many years ago there was a country called Earth Maral. One day it was invaded by the forces of the Dark World and torn apart. People lived in fear, there only hope a legend...

'A hero holding a sword will appear and restore peace to our land once again.'

No one knew when this hero would arrive...

Said the devil beast: "What's that? You challenge me? I see. Very well then. I accept your challenge. However, you will never win!"

In addition to the disk, the game also comes boxed with a notebook, maps, and a cassette tape. This follows in the tradition of other Wave Jack titles such as Ginga Denshou - Galaxy Odyssey and Kieta Princess. Many games in this series were not rewritable like other disks. However, if the game happened to be erase, Nintendo Headquarters would replace the disk at that time.

Theoretically, you do not need to the tape in order to make progress in the game, but the tape does contain useful information, as well as including music sung by Yasuko Tomita including the theme song, as well as many other songs which reveal important character information and tips.