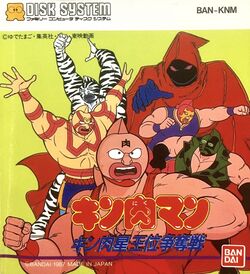 Kinnikuman: Kinniku Ookurai Soudatsusen (キン肉マン キン肉星王位争奪戦, Kinnikuman: Kinniku Ōkurai Sōdatsusen?, lit. Kinnikuman: Muscle Star Crown Competition) is an side scrolling beat 'em up action and wrestling game developed for the Family Computer Disk System by Bandai in 1987. It is the second Kinnikuman game to be released on the Famicom platform after Kinnikuman: Muscle Tag Match. Unlike the first game, which was exclusively wrestling, this game involves several side scrolling sections where the player must survive hordes of minions before ultimately reaching a stage boss at the end of the level and defeating him. When all side scrolling portions are finished, the player is then presented with a more traditional wrestling match in order to proceed to the next stage of the game.