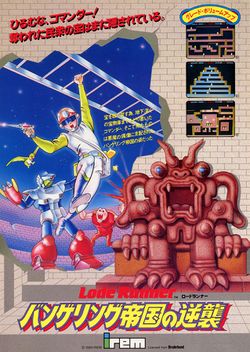 In 1984, after developing the first arcade conversion of Lode Runner, Irem developed a sequel in a very short period of time. This second version contained 30 selected levels from the 150 original levels, in comparison to the first version's 24 levels. Other than the new levels, and some new looks for the enemies (all of whom behave the same) there is no difference in game play.