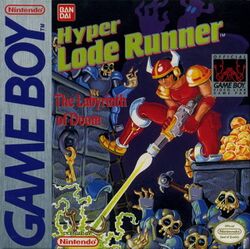 Hyper Lode Runner (ハイパーロードランナー, Hyper Lode Runner?) is an action game developer by TOSE for the Game Boy, and published by Bandai in 1989. The goal of each level in Hyper Lode Runner is to collect every piece of gold. While trying to collect the gold there are enemies that must be avoided. Bricks under the players feet to the right or left can be dissolved temporarily to allow for trapping of the enemies. When these blocks re-fill they will destroy the enemies trapped in them. This version includes a versus mode to play against another player, and an edit mode where you can make your own levels.