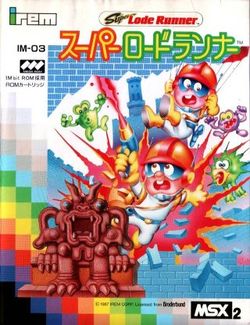 The MSX version contains an animated title screen that is very similar to the fourth arcade release, and it contains 33 single player levels as well as 18 two player cooperative levels, all selected from the four various arcade versions. Although the graphics were shrunk down so that the entire screen could fit within the resolution of the MSX2 without scrolling, the graphics are a little more faithful to the arcade version than the FDS versions.