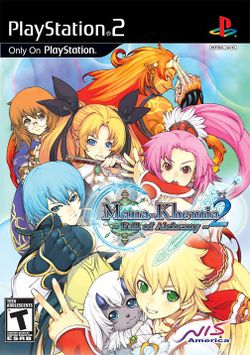 Mana Khemia 2: Fall of Alchemy (マナケミア2 〜おちた学園と錬金術士たち〜, Mana Khemia 2 ~Ochita Gakuen to Renkinjutsushi Tachi~?) is a console role-playing game developed by Japanese developer Gust for the PlayStation 2. The game was released in Japan on May 29, 2008 and was released on August 25, 2009 in North America. The game is a spiritual successor to Gusts's Atelier Iris series, (recognized as Project A10), and the sequel to Mana Khemia: Alchemists of Al-Revis.

Like its predecessor, the core of this game focuses on alchemy through which players can create items, weapons, armors and accessories to be used throughout the duration of the game. Each item has its own special properties, from elemental attributes to special skills, which are useful during battle. Like the previous game, this game has no levels and instead depends entirely on "Growbooks" to increase the characters' stats. A "Growbook" requires the player to create items through alchemy to unlock slots containing stat boosts acquirable by distributing Ability Points gained during battle. Mana Khemia 2 adds another layer to the Growbook by requiring an Ether Level of 100 (the highest) for an item, weapon, armor, or accessory in order to unlock the third slot for that specific creation, thus encouraging the player to plan out the synthesis before using any ingredients in alchemy.