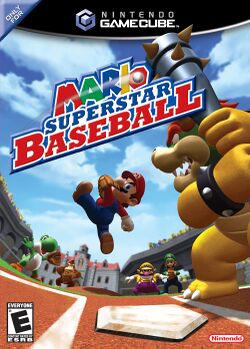 Mario Superstar Baseball is a game in the sports series with Mario that is created by Nintendo. It is a baseball game with each field having gimmicks like tornadoes carrying the ball elsewhere, blocks in the outfield that the ball can hit, etc. There is stars called team stars that allow players, namely captains like Mario and Luigi, to power up their swings and pitches, for example, Mario and Luigi's star powers are pitching a fast ball that's on fire and hitting a fireball that will set anyone who touches it on fire.