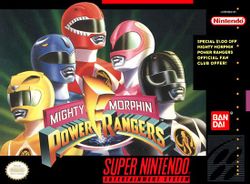 Mighty Morphin Power Rangers is a video game developed by Natsume on the SNES and published by Bandai in late 1994, with the Game Boy version being developed by Tom Create. For all intents and purposes, the SNES and Game Boy versions of the game are identical to each other, but with subtle changes here and there to fit the less powerful hardware of the Game Boy. The game is a beat-em-up that takes place on a single movement plane, as opposed to games like Final Fight which let you move between the background and foreground at will.

For the SNES version, Iku Mizutani, the composer for much of Natsume's music at the time, was able to implement speech samples for the main theme that plays during the title screen and attract demo, and for a game in the middle of the SNES's lifespan it actually sounds pretty good.

The game only features the five core Rangers from Season 1, as at the time of the game's release Tommy had lost his Green Ranger powers from the Green Candle's extinguishing.

The SNES version was one of two Power Rangers games to see a release in Japan with Saban's license intact, the other being Power Rangers Pinball.