There are several Treasure Boxes hidden in Rapadagna City. All are accessed by pushing

between pairs of trees. 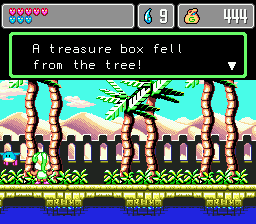 Head to the very far right of Rapadagna. Push

between these trees to find a treasure chest containing an Elixir. At one point in the game the trader's camel hints at the secret being there, but the chest can actually be claimed at any time. 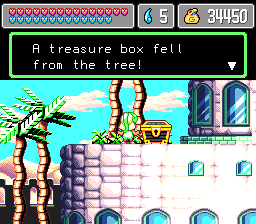 Head into the Rich Lady's house and up onto her roof. Push

between these trees to find a treasure chest. This chest contains lots of gold coins and a single bag of gold. 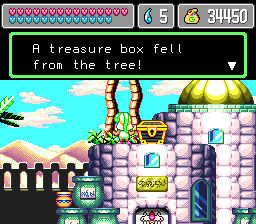 Climb up to the roof of the Weapons Shop. Push

between these trees to find a treasure chest containing some gold coins and a Life Drop.

Before reaching the top of Mute Tower, if the player receives gold from an enemy or a chest, and it raises their total gold to exactly 777, they will receive an extra 7000 gold bonus.

The "Rich Lady" will offer to buy gold bars for various amounts during the game.

Thanks to the work of the Gens Plus! team, there is a plethora of cheats for getting items and gold for free, including the Debug Armor which is inaccessible by any other method. This method only works in Gens Plus!, no other emulator or cheat device supports this patch format.

Download this cheat file and rename it to match the name of your patched ROM. It may or may not work with untranslated ROM dumps, but will work with both the partial and v1.2 translations.

You can also access the Debug Armor without having to use the cheat file mentioned above, but now using the cheat below instead.