From StrategyWiki, the video game walkthrough and strategy guide wiki
(Redirected from Nemesis 3: The Eve of Destruction)
Jump to navigation Jump to search 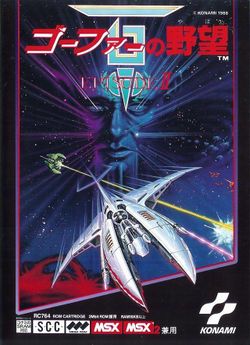 Gofer no Yabou: Episode II (ゴーファーの野望エピソードII, Gofer no Yabou: Episode II? lit. Gofer's Ambition Episode II) is a side-scrolling shooter developed and published by Konami for the MSX home computer in 1989. It was published in Europe as Nemesis 3: The Eve of Destruction later on the same year. The game is part of the long running Gradius series, and is a spin-off of the arcade game Gradius II: Gofer no Yabou. It is the second game of the series to be released exclusively for the MSX after Gradius 2. In terms of the story; the game is a sequel to Gradius II and Salamander. The game takes place almost 200 years after the crisis with Dr. Venom and James Burton has died in the year 6718. The Vic Viper is replaced by a new ship called the Vixen (4 classes); piloted by David Burton, a direct descendent of James who is assisted by his AI Gaudie.

Similar to the arcade version of Gradius II, four distinct classes of Vixen can be chosen. The first one resembles the original Vic Viper. The second one is a twisted version of Vic Viper, featuring the new "Photon Missile". The third one is more like Metalion from Gradius 2, featuring "Napalm Missile" and (Extended) "Fire Blaster". The fourth one is more like the Sabel Tiger from the MSX version of Salamander, featuring the 2-way missile approach and "Ripple Laser". All four classes may choose between the classic "Shield" or the "Force Field", which takes less hits to expire, but protects from any direction. It's also possible to choose the behavior of "Option", from the original shadow movement, "Fixed" and "Rolling", like the "Option Warrior" from Gradius 2.

The game retains several of the new weapons introduced in Gradius 2 like "Up Laser", "Fire Blaster" and "Vector Laser" as well as MSX Salamander weapons like "Meteor Laser" and "Screw Laser". This is the only game in the Gradius series which visibly keeps track of the number of speed boosts. In order to upgrade the ship's weapons, secret spots must be found, just like the secret stages in Gradius 2 and the predictions in MSX Salamander.