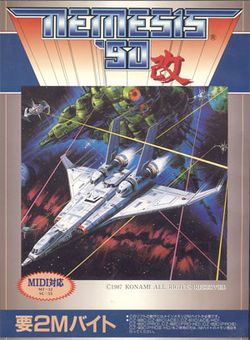 Nemesis '90 Kai (ネメシス'90改, Nemesis '90 Kai? lit. Nemesis '90 Revision) is a horizontally scrolling shooter for the Sharp X68000 Japanese home computer system. It is an enhanced remake of the original MSX-only sequel to Gradius known as Gradius 2. It was developed and published by SPS, the company responsible for the extremely arcade-accurate Sharp X68000 ports of Konami's Gradius and Salamander. Though development of this remake began in 1990, it was not released until late into 1993.

While this remake uses the MSX game as a base, it makes several modifications to enhance and modernize the look and feel of the game. It was one of the rarest and most-sought after games in the Gradius series. However, the changes presented in this version inspired an unofficial fan-made remake of Gradius 2 for the Sharp X68000 known as Nemesis '94 which seeks to undo the changes presented in this version, while maintaining the graphical and sound enhancements.