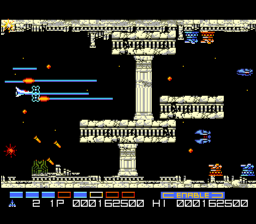 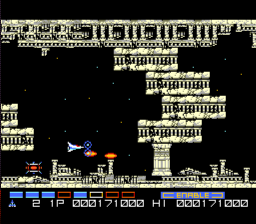 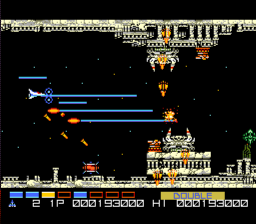 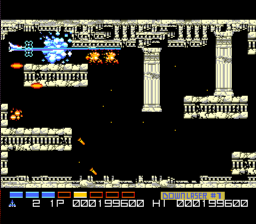 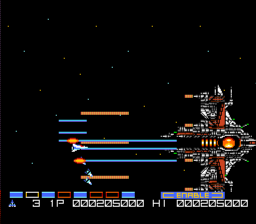 The boss of this stage is identical to the boss of Plant Planet. Use the same strategy of trying to maneuver between the two center laser beams to remove the shields and destroy the core. Hanging back to the left of the screen can give you more time to react to the position of the laser beams as they appear.

The upgraded remake of the game stays pretty faithful to the essence of this stage. There are still many pillars and columns to shoot down and cause the collapse of many platforms that serve as barriers to your progress. However, with the increased pace of the game, the pillars feel easier to destroy, and you may at times even destroy some of them off-screen before you even see them. There is a still a gap in the middle of the stage, and there are still three Vector Beam time limited power-ups to collect. Each must be obtained by moving platforms out of the way after shooting out their support columns. Be aware of how fast you are moving and how much space you have to move around in. Things can become a bit cramped at times, and it's easy to misjudge where you are and crash into things. 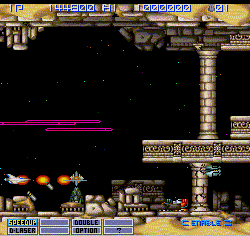 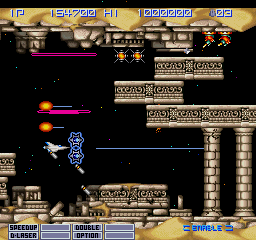 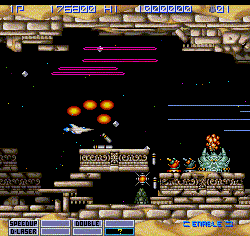 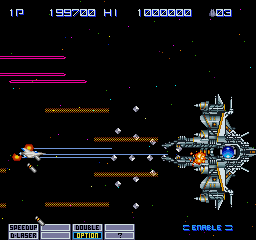 Rather than returning for a second appearance, this is the first time you fight against the Misfits Ship. When it arrives, it announces its presence by firing off two gigantic lasers at the top and bottom of its wingspan. Stay lined up with the core, and you will easily avoid the lasers. Then the Misfits begins to use its four smaller laser cannons. Unlike the original version, the inner and outer lasers travel at different speeds from one another, adding to the complexity of its attack. You must, of course, dodge the bullets that appear as a result of shattering any shields before you can access the core. Once you invade the core, be aware that there are some gates you have to destroy before you reach the final gate that grants you access to the power-up that you can obtain.