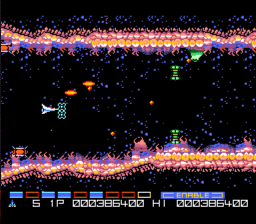 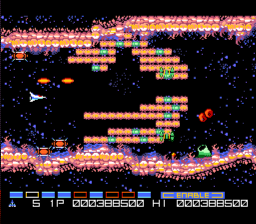 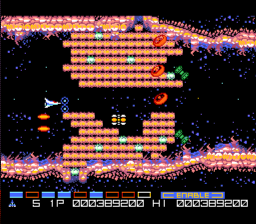 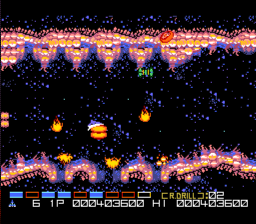 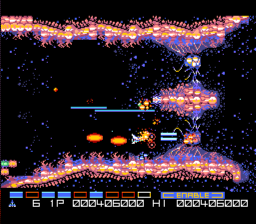 You won't be fighting a Core ship to complete this stage. Rather, you must destroy an organic monster to advance to the next stage. This boss is almost a complete opposite of the boss from the sixth stage of Gradius. Rather than the object in the center be the target, and the objects on the side present the firepower, it is the center object that sprays the space around the Metalion with projectiles, while the two objects near the top and the bottom are the targets. The projectiles can be destroyed with your shots, providing you some measure of protection. You must begin focusing all of your firepower on one of the two smaller organs near the top or bottom until you see an explosion, indicating that it is defeated. Then you must safely cross from one side of the screen to the other in an effort to destroy the other organ. If you are successful, you will be able to advance to the next stage.

This stage of the remake remains very faithful to the original. None of the stage's contents have changed, just the pace at which they appear. One very important difference to consider is the point near the middle where the particles rise and descend from either wall. In the original, once you collected the Option Barrier, you were generally safe staying to the right and letting the particles close in behind you. This isn't the case in the remake, and you're actually safer staying to the left, allowing the particles to close up in front of you and then shooting your way through them. The Rotating Drill time limited power-up is still present, but its only true purpose is to help you access the hidden bonus level (see Secrets). Before the boss, you will still find a chamber where corpuscles are ejected, but they travel very plainly up or down, instead of slightly forward like the original. 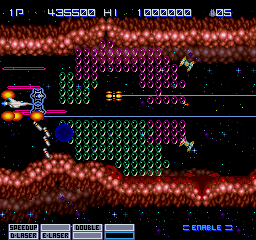 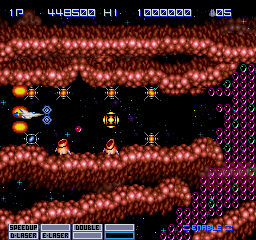 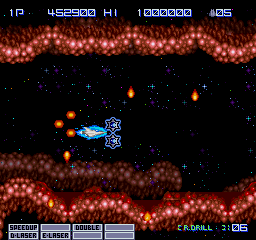 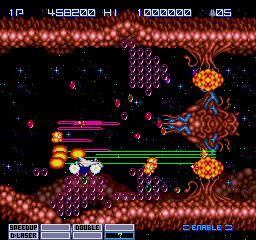 Once again, you must destroy the two organic nodes above and below a central source of firepower. If you have enough firepower yourself, then the spray of bullets won't present much of a problem. However, if you fail to clear away enough of the particles leading up to the boss, you may find it very difficult to get into a position where you can shoot the nodes. If you have Up Lasers, stay low to the bottom of the screen, blast your way through, and let the Up Lasers clear away any particles above you. Vice versa if you have the Down Lasers. Since this is not a core ship battle, there is no core to invade, and you will simply advance to the next stage.