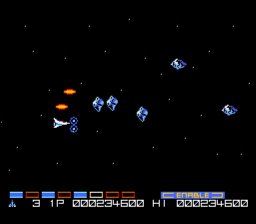 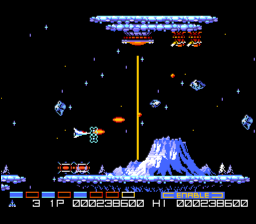 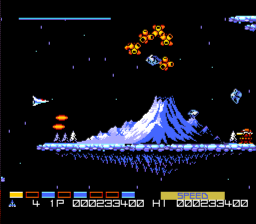 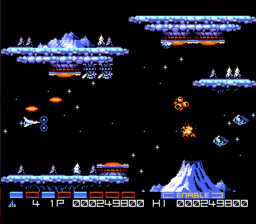 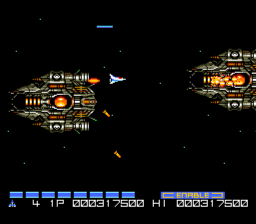 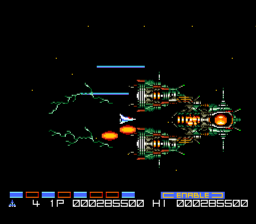 The size of this next boss ship may be a little misleading. The two very large arms that extend ahead of the core produce massive lighting attacks that can be aimed at any target in front of them. However, this offensive structure creates its very own weakness: the space directly between the arms and in front of the core is defenseless. Knowing this to be the case, the Mayhem Ship immediately rushes forward after firing off an electrical attack in an attempt to crush anyone trying to exploit that weakness. You can in turn prepare for this very attack by immediately flying back to the left as soon as the lightning attack concludes. In doing so, you will pull your Options right in line behind you and concentrate your fire on the core shields, and ultimately the core itself, for a fairly quick victory.

The remake changes only a few aspects of this already challenging stage. You will continue to be pelted by floating crystals that travel from the left side of the screen to the right at various angles. One significant change that occurs in the remake is that the crystals are not impeded by the terrain. They can freely pass through it on their approach to you, which means you can't use any of land passing by as shields. If you don't have Lasers or a lot of Options, you should dodge most of the Crystals as it will be difficult to destroy them in time. You can still damage the volcano tops to prevent them from spewing enemies onto the screen, but the vulnerable location to shoot at seems narrower then in the original. You can still camp in the upper left corner of the scene where the scrolling stops, but you must be extra careful about rocks that fly through the terrain now. 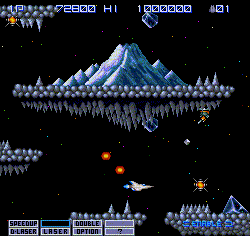 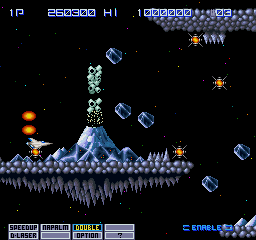 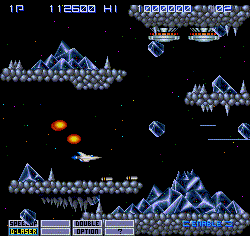 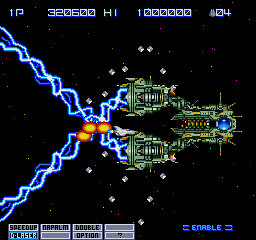 A squadron of Big Cores still challenges you before the boss appears, but you only have to defeat eight of them instead of ten. Since the starfield continues to scroll, it's much harder to use the stars as a guide to know where to sit and fire as the Cores make their appearance. To make matters worse, the Cores can fire behind them as they travel up or down the left side of the screen. The boss of this stage is the same Mayhem Ship that you face in the original. The strategy is largely identical between the two versions. There's only one catch that you need to be aware of. When the boss first appears from the bottom of the screen, it gets into position to attack you. Most players fly the Metalion right into the gap between the two giant laser cannons. However, in this version, the boss makes a slight correction, up or down, that is just enough to kill most players if they are parked between the cannons. If possible, wait just outside of this gap until the boss truly comes to rest before flying in to escape the damaging electrical beams, and then flying back to the left when the boss charges you.

When invading the core, you will find that the path branches in two locations. In he first branch, you can shoot out a gate for a shortcut. In the second branch, the narrow path at the top looks like it offers safer passage, but it actually puts you at the mercy of several cannons just beyond the exit from the tunnel.