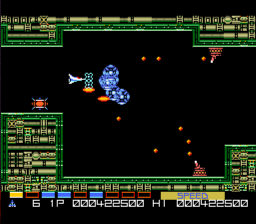 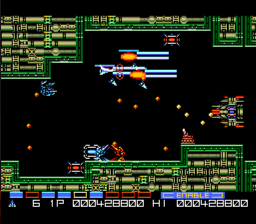 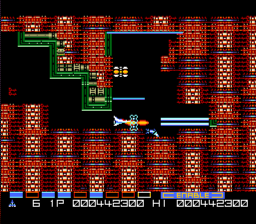 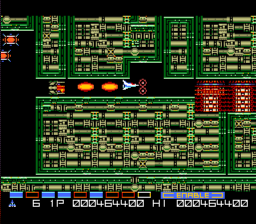 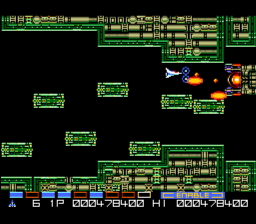 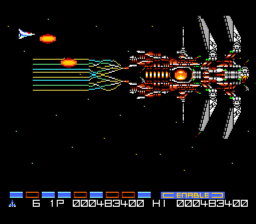 The Abaddon Ship is the most aggressive ship that you will face in the game. The core and its shields are protected by a giant array of lasers that fire directly in front of the center, making it next to impossible to get a direct shot off with the Metalion itself. Having Options in this battle improves your chances substantially, since they can sit in the line of fire and still be able to shoot at the shields and the core. Provided you have Options, your goal will be to keep the Metalion out of the line of fire, but only just barely so that your Options can lag behind you and be able to fire at the shields. Ideally, you want to wait for the Abaddon to start firing it's laser while it's moving toward you. Then while the laser is reaching the left side of the screen, fly in the opposite direction as the Abaddon to avoid the laser, and lure the ship in that direction on the next shot. You will volley back and forth until you manage to chip away at the shields and shoot down the core. Just be cautious with your timing, and don't accidentally try to cross over while the laser is still being fired.

Note that after you beat the Abaddon, you will receive a distress signal, and discover that the fortress was a trap to lure you all the way out into far space, while the real threat was closer to home. As a result, you must now travel back through all of the previous six stages in reverse order before you can face the real threat and save the solar system.

For the most part, the remake of this stage remains true to the original. However, due to the speed of the game, and the amount of damage it takes to remove certain obstacles, it presents its own set of challenges. The craft that fly up and down, as well as the mid-boss which appears when the scrolling stops, seem much easier to defeat. If you are fully powered, they won't be able to withstand your attacks for more than a few seconds. However, the full screen barrier that populates two sections of the stage is a bit harder to deal with. Even at full power with four Options and Lasers activated, you may have a hard time punching a wide hole through the barrier. The Lasers don't feel as effective in this section, and you'll want to minimize the amount of movement you make vertically through these sections. Grabbing the time limited Option Barrier power-up will certainly help, but not quite as much as you'd think. As stated above, the mid-boss that appears near the very end of the stage when the scrolling stops takes less damage to defeat, but it is still tricky to line up a shot at it with all of the blocks rising and falling. In addition, there is yet another set of rising and falling blocks that has been added beyond the mid-boss that you must navigate through in order to reach the Adabbon. 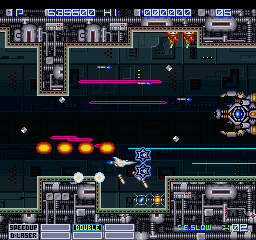 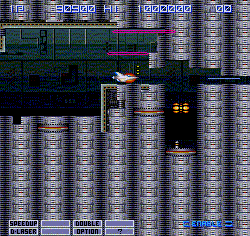 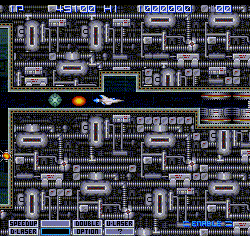 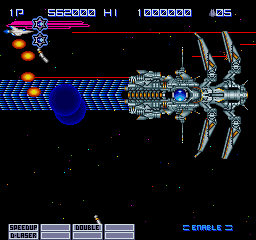 Despite how dangerous this ship is, it feels slightly easier to defeat in the remake. It doesn't pursue you as relentlessly as in the original, giving you more opportunity to avoid getting caught within its giant laser, and to line up your shots at the core and its shields with an Option or two. You can't access the core of this ship once it's been defeated; the game will kick you right into the next part of the story where you are recalled back to planet Gradius in order to defeat Venom's ship before it's too late. At this point you will begin to fly through repeat instances of the stages you visited in reverse order. However, in the remake, these stages are often condensed versions of the first pass through them. Though shorter, they are no less difficult to clear.