The first wave of five arrives from the bottom, and is followed by a wave from the top.

This stage is in a bubble fortress, and features some odd parts. The enemy base will have watery walls on the top and bottom. You will also expect flying waves approaching from behind, in addition to the bubbles arriving ahead of you.

When you see the large blue bubble enter the screen, you may notice an enemy hovering behind you. After a few seconds of waiting, it will charge forward and attempt to steal your options (SNES only). 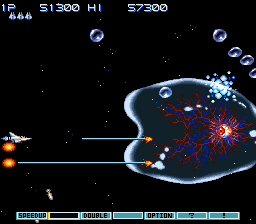 The stage boss is slightly weaker than the previous one.

To damage it, aim for the eye. Your shots will gradually drill a hole to the eye, allowing you to get a clear hit on the core.

There are hardly any differences, although you might find an Option Hunter.