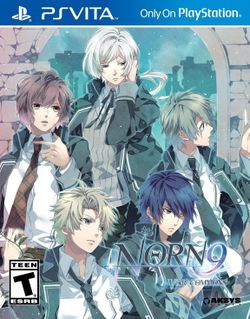 Norn9: Var Commons is the PlayStation Vita rerelease of Norn9: Norn+Nonette (NORN9 ノルン＋ノネット, Norn9 Norun+Nonetto?), a PlayStation Portable adventure game released only in Japan. It is the first in the Norn9 series of otome games, developed by Otomate and published by Idea Factory. Var Commons was localized in the west by Aksys Games.

Whereas otome games are usually told from the perspective of one female protagonist, with the branching routes represented by men she can pursue, Norn9 gives the player a choice between three protagonists. Each protagonist has a unique personality and past, as well as having a choice between three branching paths represented by the three men that are assigned to her team; these paths then branch further between bad, tragic, and happy ends.

Var Commons adds extra stories for each of the routes, making up nine in total, unlocked after obtaining a happy end for the respective character. It also adds a luck-based mini-game that parodies traditional JRPGs, "Norn9 Quest," and a feature in which the player can touch images via the Vita's touch screen in order to view the characters' thoughts at the time.

Norn9 begins from the perspective of Sorata Suzuhara, a young boy living in the modern Heisei Era of Japan. During a school field trip, he is transported back to the Taisho Era, where he meets a friendly pink-haired girl who mysteriously does not remember her own name. The boy then boards a ship sent by an all-knowing organization known as "The World." As it turns out, the young men and women on board the ship are espers sent by The World to use their powers for some unknown purpose. The journey is further complicated by the presence of a traitor, giving the espers no other choice but to pair up in order to better surveil each other.

The three girls on board the ship (the kind but ditzy pyrokinetic that brought Sorata onboard the ship; the strong-willed Mikoto Kuga, who has the ability to erect indestructible defensive barriers; and Nanami Shiranui, a quiet kunoichi with the ability to erase the memories of others) are given a choice between which of the men they wish to pair up with; whether their relationship leads to love or ends in tragedy is up to you.