At the remote Excavation Site #4, a young mercenary named Edge is bored. He asks another guard if there's anything special about the place, but his companion just shrugs it off - the less you know, the better.

Suddenly, the sound of gunfire errupts from the entrance to the ruins. Edge and the other guards rush in, to find the workers trapped by an ancient bio-mechanical weapon.

Meanwhile, a small group of Imperial ships intercept the emergency transmission from Site #4 - but strangely enough the captain of the lead vessel, Craymen, was planning on arriving there within the hour anyway.

Back at the ruins, regular weapons are having no effect on the bio-weapon, so Edge dashes for a rocket launcher - a move which catches the attention of the ancient creature. 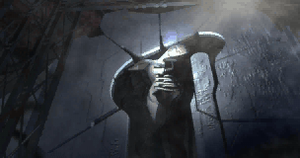 It attacks Edge, smashing through a wall when he ducks out of the way. Turning around, Edge discovers the body of what looks like a young woman, buried in the foundations of the ruins. Before he can process this discovery the creature attacks again, but Edge manages to blow the floor out from under it with his rocket launcher, and the bio-weapon falls into the darkness below the ruins.

The evacuated workers and guards make it outside just as Craymen and his men arrive. Most of the site personnel are gunned down by one of Craymen's henchmen, and when Edge lets slip that he found the girl, he's knocked unconscious.

You'll then be asked to enter your name.

A ball of light decends slowly down an impossibly long cavern, landing in a pool of water and depositing Edge just below the surface. He wakes, incredulous, swims to the edge of the pool and climbs out. 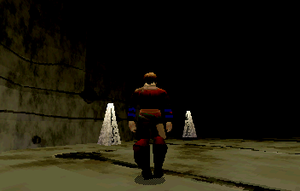 Walk forward, and on the left you'll see two containers. The first one contains a Shell Plate item; the second has a Handgun and an Elevator Key. You've got to get right next to each one to open it - if you're too far away, the scanner will display

and Edge will just describe the boxes. 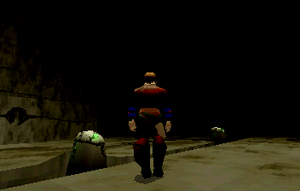 On ahead, there are two locks on either side of the elevator. Like the containers, you'll have to get right up next to them to use the key.

As the elevator reaches the top of its path, Edge finds himself surrounded by dozens of bio-weapons like the one he faced off with before, but the handgun he found won't fire. Suddenly, a bolt of lightning falls from the top of the cavern, destroying the bio-weapons. A dark shape dives past the ledge, and when Edge looks over a dragon rises out of the darkness.

As it approaches Edge, he experiences visions of himself, the girl and Craymen, and a tower in the middle of the ocean. The dragon has apparently chosen Edge as its master; as he climbs onto its back, the dragon flies up out of the caverns.

Follow the valley north, taking the right fork to find an area map.

Over on the right, talk to the Captain.

At wind net, head in opposite direction from fans (past save point), down the mineshaft. Access the device at the end to turn off the fans. Back out, head through to Canyon Deep.