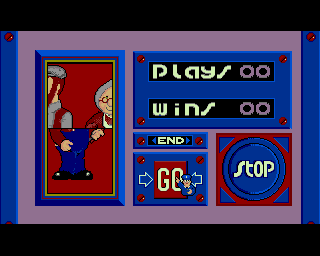 If you push the joystick's button after selecting the option "SNAP" on the menu in the Commodore Amiga version of this game (once again indicated by it flashing), the game shall proceed to the screen shown above; you shall then have to use the joystick to direct the Pat-cursor over to the "GO" button and press it to start the two reels spinning, which will advance the "PLAYS" counter by one (the top one spins to the left and the bottom one to the right). You shall then have to direct the Pat-cursor over to that "STOP" button and press it once to stop the bottom reel, then press it again to stop the top one - and if the image of the character's lower half displayed on the bottom reel matches with the upper half on the top one (in addition to Pat himself, there is also Ted Glen, Mrs. Goggins, Mrs. Hubbard and Peter Fogg), the "WINS" counter will advance by one. You can then do this again as many times as you like (however, both of the counters will break at 99) until you get tired of it, direct the Pat-cursor over to that "END" button, and press it to return to the menu.