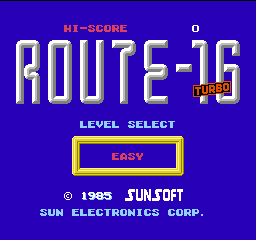 Route-16 Turbo is an updated version of an older arcade game entitled Route 16, developed jointly by Tehkan (later Tecmo) and Sunsoft (in a manner similar to the way Namco's Warpman is an updated version of Warp & Warp.) Route-16 Turbo takes the concept established in Route 16, and updates the quality of the graphics, but keeps the goal of the game the same. The game play is a near perfect combination of Rally-X and Venture. The player drives a car through several zoomed in blocks collecting bags of money and other items, and travels between blocks along a zoomed out view of the world.

The original arcade game was ported to the unsuccessful Emerson Arcadia console in 1983. Route-16 Turbo was originally released only for the Famicom in Japan, and allowed you to choose from between three different difficulty levels. In 2001, a reproduction of the Famicom game was packaged along with Atlantis no Nazo in Memorial Series: Sunsoft Vol. 2 for the PlayStation.

You control the player car. Your goal is to travel around to every block that contains a collectible item, and collect it. Once you collect every item in the stage, you will advance to the next stage. You must avoid contact with each of the enemy cars that occupy the stage with you, as well as any moving obstacle that a block might contain. You can use the Turbo button to help you get away from trouble quickly, but you will use up considerably more fuel in the process. When you run out of fuel, you can continue to drive, but Turbo will no longer be available.

The enemy cars wander around the maze passively seeking out the position of your car. They attempt to hone in are your position, passing through blocks as they do. The passages in the blocks may not allow the enemy cars to approach you, but they can take a direct path towards you in the alleys between the blocks. Collecting the flag will temporarily turn the tables on the enemy cars. During this time, you can collide with them for bonus points. If you hit them, they will remain out of commission for a few moments, and then return. As you rise in levels, more enemy cars will be hunting for you.

There are various items to collect inside many of the blocks in each stage.