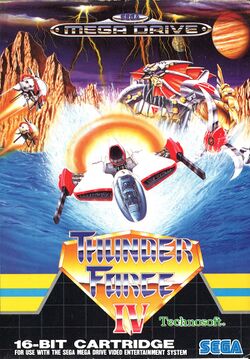 Thunder Force IV (サンダーフォースＩＶ, Thunder Force IV?) is a side-scrolling shoot 'em up video game developed by Technosoft as the fourth installment of the Thunder Force series. It was released in 1992 for the Sega Genesis console in Japan and the United States, and in 1993 in Europe. In the USA, Sega of America decided to rename the game as Lightening Force: Quest for the Darkstar. In Europe the name was left as Thunder Force IV.

Taking place directly after Thunder Force III, the ORN Empire is thought to be defeated by the Galaxy Federation, but still suffers from increasingly frequent attacks from hostile forces. The forces are discovered to be the "Vios", an army made up of allies and residual forces of ORN. The Galaxy Federation discovers the location of their headquarters on the planet Aceria and attacks, but since the power of Vios has grown greater than the previous ORN Empire, the Galaxy Federation forces are initially defeated. Once again, they develop a new small yet powerful fighter spacecraft, the FIRE LEO-04 Rynex to eliminate Vios. The player controls Rynex and travels through ten stages while battling Vios forces.