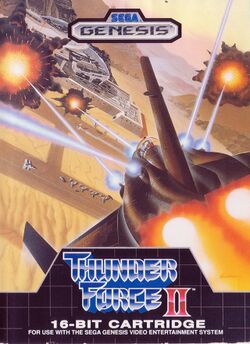 Stages in the game are now split into two formats: the free-directional scrolling, overhead stage format from the previous game (referred to as "top-view stages"), and horizontal forward-scrolling stages (referred to as "side-view" stages) which would become the series mainstay, dropping the former entirely. Each stage begins in the top-view perspective, where the player has to locate the cores of a certain number of major enemy bases and destroy them. After this is accomplished, the stage continues from the side-view perspective, which plays like a traditional horizontal scrolling shooter. After the boss of the side-view sub stage is defeated, the player moves on to the next stage.

Building upon its predecessor, Thunder Force II introduced a weapon system that would become the staple for the rest of the series. The player's ship now has default arsenal of weapons. By collecting certain items, the default weapons can be upgraded to more a powerful level. Also, the player could obtain a certain number of new weapons with various unique abilities by collecting the weapon's corresponding item (the "Hunter", a signature weapon of the series, debuts in this game). Once obtained, the weapons can be switched between at the player's desire, but if the ship is destroyed, all weapons are lost except for the defaults. The top-view and the side-view stages have different sets of weapons; losing weapons in the top-view stages do not affect the weapons equipped in the side-view stages and vice versa.

Thunder Force II also introduced the CRAW add-ons; small pods which revolve around the ship. The function of the CRAWs is to block weak incoming bullets, and to provide extra firepower by firing single, normal shots. The player may acquire up to two CRAWs at a time, but will lose them upon ship destruction. Exclusive to this game is an item which temporally increases their orbit speed, making them more likely to block bullets.

Taking place soon after Thunder Force, the ORN Empire creates a powerful new battleship, the Plealos (a.k.a. Preareos). Using this battleship, ORN once again attacks the Galaxy Federation. The outcome of the attacks result in the destruction of the Galaxy Federation affiliated planet of Reda, and heavy destruction on the planet Nepura (a.k.a. Nebula), which ORN eventually captures from the Galaxy Federation. Eventually, the Galaxy Federation learns that ORN houses Plealos deep below Nebula's surface when not in use and takes the opportunity to plan an operation to take it down. They send the next iteration of their Fire Leo series of fighter craft, the FIRE LEO-02 Exceliza, to destroy ORN bases on Nepura and eventually find and destroy Plealos. The player controls the Exceliza and travels through a variety of stages to accomplish this goal.

The Sharp X68000 version of the game has slightly better visuals than its Mega Drive/Genesis counterpart. For example, some of the top-view oriented stage backgrounds have parallax scrolling/transparency effects which the Genesis version lacks. This can be most readily be seen from the water in the first top-view stage. On the other hand, sprites in the Sharp X68000 game are typically larger, but also usually less animated than the later Sega Genesis port.

The X68000 version has clearer voice samples, including extra voice effects such as the exclamation heard after player's last life is lost. The Sharp X68000 version also has an introduction sequence, and an extra stage (top and side view) not found in the Sega Mega Drive/Genesis version. Finally, both versions have a few weapons unique from each other (for instance, "Sidewinder" in the X68000 version corresponds to "Nova" in the Genesis version).