The game begins when Kunio goes to the hotel. Along the way you will be accosted by three thugs who call you a "Sakuramiya punk". They do a fair bit of damage, so take this time to learn the controls. Once you defeat at least one of them the survivors will shout threats and run away. You get 2 EXP for each one you take down, but it's virtually impossible to defeat all three at your current level. After this you'll automatically go to your room and sleep. When you wake up you're told your friend Hiroshi is being beaten up in the hotel garage. Leave the room.

At this point your low skill levels will make saving Hiroshi more difficult. There's no time limit, so feel free to explore a bit first. The hotel has five floors, and you can explore them freely using the elevator— B1 is where the parking garage is, so don't go there until you're ready to save Hiroshi otherwise you'll be drawn into the battle via a cutscene. On all but the second floor you will find random NPCs who will challenge you to a battle, and you can beat them up for the experience. You can also attack individual people who haven't attacked you yet, and there are no consequences for doing so. The advantage of getting drawn into an actual battle is that the enemies will drop random loot, whereas when you attack neutral NPCs you only get experience. If you want some weapons you will find some on the second floor: there is a pillow in the first room and a wooden sword in the third. These respawn, so you can get as many as you want. There are also some in rooms on the other floors. In the first room you'll also find Kouji; talk to him to save your game. Any time you want to heal go into the middle room of the second floor and hit

on either bed. This will also change the time of day; if you sleep during the day you'll wake up at night, and vice versa.

When you are ready, go to B1. Masa and Yoshohiro tell you where to go. You'll find Hiroshi being clobbered by three of the blue-suited punks you've faced earlier. They are not much harder than those you fought earlier, and if you leveled up to level 6 to get the Jump Kick you can easily keep them off you. Whichever one you defeat last tells you he has pals on the fourth floor. After this you'll see a cutscene, then Hiroshi will ask you if you want to hang out with him. What you choose here will change an upcoming cutscene, but the overarching plot is unaffected.

Whatever you choose, head to B1 when you regain control. If you want to you can go back to the garage and explore it; it only leads to a very small part of the sewers you'll explore later in the game, but this tight space is a great place for finding random enemies to fight. Along the way you'll also find a lead pipe and a rock. The rock isn't a very good weapon, but the pipe deals a good deal of damage. You can carry it around with you for as long as you like, and you will only lose it when it breaks or you enter a cutscene. Like all weapons, it also respawns when you leave the area. When you're ready, go to the lobby of B1 and head through the doors to the west.

If you chose to go with Hiroshi you'll be accosted by some punks as soon as you get outside. If you didn't you get to explore a bit first. Just outside here is a vending machine; here you can exchange Prepaid Cash Cards for various healing items. The trash can beside it deals a great deal of damage (it can take down enemies in the current area in one or two hits) but you move slower when carrying it and you can't jump. The enemies out here give a lot more experience but are also harder to defeat. You can return to your hotel room any time you need healing. You'll meet Yoshohiro here, and he'll tell you Hiroshi is getting beaten up at Umeda Umechika West (the area outside the hotel).

Either way, you'll end up outside the hotel with Hiroshi getting another beating because they think he is working for some sort of "Alliance" (which he admits he is). After this you'll end up back in your room and Hiroshi's friend Miho will come to explain things. It turns out that she is behind the Alliance, and founded it to fight against the Union, a gang of bullying students. She tells you the next meeting is in the Shinsaibashi district and that she needs your strength to take down the Union. She then gives you a Snake Ring, a Prepaid Cash Card, and a Taxi Card. The Taxi Card lets you get a ride back to the hotel from most parts of town. The Snake Ring deals less damage than the Wristband you start with but it gives more defense; the choice is yours.

You can now explore Umeda Umechika West, East, and North in addition to Hotel Osaka. When you're ready to continue the story head to Umeda Umechika West, then go up through the passage beside the vending machine to reach Umeda Umechika East. From here head to the right. You'll see two Union members talking. They'll challenge you, then three more will come in from the left. The last one to be defeated will tell you a guy called Nakazaki told them to meet at the subway platform. You'll get a Subway Ticket and a Tree Lining, as well as 30 EXP. You can now go through the barriers to the right to explore Umeda Station. The enemies down here are tougher still and there are more story-related battles to be fought, so you may want to work up to level 7 or 8 before you continue. When you're ready, head through the barriers. 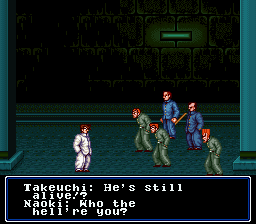 You can't go to the left platform just yet, so go down the stairs on the right. Head to the right and Noboru will recognize you and run off. Continue to the right to fight Aiko and her cronies. As each gang member falls another will come out, so in the end you'll fight ten. You get a nice 194 EXP. If you want to heal up you can return to the hotel now. When you scroll to the right again Noboru will come out with backup. After taking out another nine members Nakazaki will attack with four more thugs. After taking them down you get 271 EXP and some Canvas Shoes. Now return to your room. 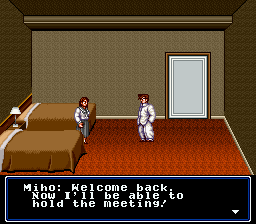 Back at the hotel, Miho is waiting in your room. She gives you a Zone 1 Computer Pass, a Phone Card, and Brass Knuckles. She tells you to meet her on the bridge at Shinsaibashi. Back outside, Yoshihiro tells you he wants to help, and asks where the meeting will be. When you're ready, head back to the subway terminal (from the hotel basement go left to Umeda Umechika West, up to Umeda Umechika East, and right into Umeda Station. Take the right-hand stairwell. Unless you really want to fight your way to the right through whatever random enemies appear, wait by the stairs until the train arrives. You might have to fight off a random group or two before you can get onto a train (you can't enter the train during battle). When the train arrives quickly go over to a door and hold

until you disappear. The doors will then close and the train will depart. It will drop you off at the Shinsaibashi Station platform. Head up the stairs and you'll be in Shinsaibashi.