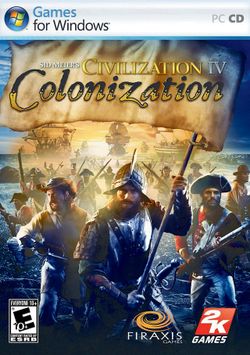 Sid Meier's Civilization IV: Colonization is a remake, using the Civilization IV engine, of the 1994 PC game Sid Meier's Colonization. Players control settlers from one of four European nations, Spain, England, France or the Dutch, that are trying to conquer/colonize the New World in the time period between 1492-1792. The final goal of each player is to build up their colonies and a standing army, then declare independence from their mother country and defeat the military force that the King sends to crush the rebellion.

The Windows version was released on September 22, 2008. A Mac OS X version is planned (as listed by the ESRB), but a release date has not yet been confirmed. Civilization IV: Colonization does not require the original Civilization IV in order to play.