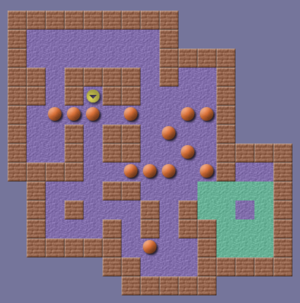 Move one space down, and two spaces to the right - this pushes a crate that you need later on. Next, continue down, and circle around the bottom to reach the main room.

The packing order for this level is to fill rows from the bottom-up, left-to-right. 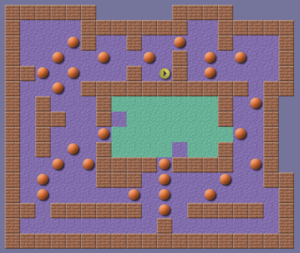 Start by taking the right exit from the starting room.

When you reach the right-hand corridor, push the three crates there down one tile at the most, and must the middle crate into the target area. Exit the target area by pushing the crate on the left exit left by two spaces.

There are a few packing orders available, but the top row starts first. 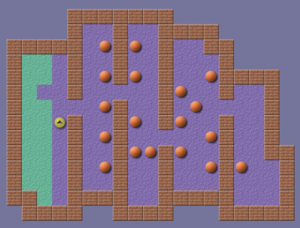 In the second room move the left lower crate down two spaces. Move the center crate in the third room up three spaces. Now, store two additional crates in the fourth room. The reamaining obstruction is in the first room. To get them out of the way, move the crate above and below the doorway to the third room. From here, crates can be pushed one-by-one to the destination. 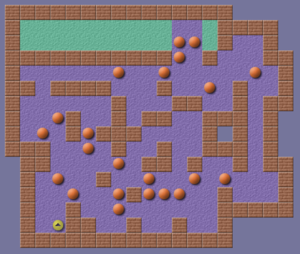 The first task is to clear the left side of the map. Move the crate directly above you out of the way (either right or downward), and approach the right-hand room of the two that are directly above you. Push the lower crate left one space, and the upper crate to the top, storing it just before the doorway to the corridor. Push the crate below you downward, and the crate at the doorway one space right. This gives you access to the target area, where you can clear the initial obstruction.

After a route on the left is open, you can commence storing the other crates. You will have to start with the crates at the upper-right corner, and progressing through the other crates in the path. 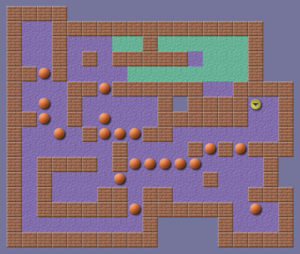 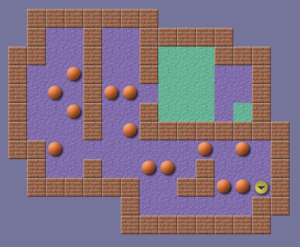 Move up, and push left four spaces. Head upwards, and unblock the exit by moving the first crate into the goal. Push the first crate you moved left one more space, then move the crate above to the exit. You should now be able to clear the bottom-right crates. 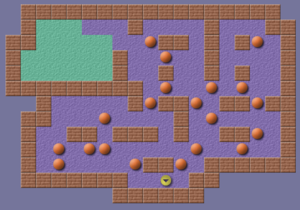 Make the first approach to the target by the mid-right path.

There is no significant difficulty in this map - just push the crates as the map becomes more open. 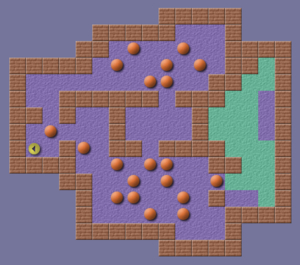 Push the first crate up, then to the right until it is blow another crate. Move up and right, in order to push the top-most crate to the right. This allows you to enter the bottom room.

When packing crates, start with the upper and left alcoves first. Once they are filled, place two crates on the right column (either staggered or in their position), followed by filling the bottom-right corner. The center column should be filled without issue. 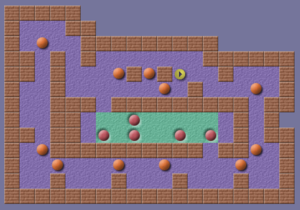 Next, get the outer crates into position. Start circling around the right, trying to keep the crates in their general position until you reach the lower entrance to the target. Push the crate to the left one space, then directly under the entrance, before pushing it left one more space.

Circle around the left. As you go through the left hand side of the map, pack the crates in the middle of the left rooms, and in the doorways on the bottom. Go through the target area, but push the lower-left crate in the goal to the right. 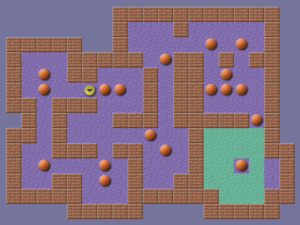 Exit the left cluster by pushing around the necessary crates.

To get crates to the target, you need to get the two crates in the lower room out of the way. Push the upper crate left until it reaches the alcove, then push it one space right and one space down. Push the other crate into the alcove.

Fill the reclaimed space with crates from the upper rooms. If you cleared the top-right corner of the two blocking crates, there should be no obstruction to getting all crates to the goal.